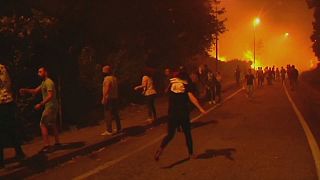 Officials in the northwestern Spanish region of Galicia say that three people, two of whom were trapped in a car, were killed as a result of more than 130 blazes reported in different areas.

At least 17 fires were close to inhabited areas, many of them in Vigo province, prompting emergency services and police to evacuate thousands, the regional government’s environmental department said.

At one blaze residents could be seen taking part in efforts to battle the flames, forming a human chain to deliver buckets of water to the frontline.

Authorities in Galicia said that the strong winds from Hurricane Ophelia and high temperatures fanned the fires, but investigators are also focusing on human causes.

Light rainfall early on Monday is expected to help extinguish the flames.