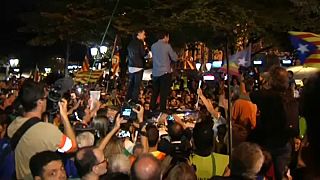 Updated: 21/09/2017
<p>Catalan separatists clashed with Spanish police in Barcelona into the early hours of Thursday morning.</p> <p>Tensions are running high as the central government steps up its efforts to stop an independence referendum scheduled for October 1.</p> <p>Tens of thousands of people gathered outside the regional government’s offices after police raided the building and arrested more than a dozen local officials, including Catalonia’s junior economy minister Josep Maria Jove.</p> <p>Waving the red-and-yellow Catalan flag, they chanted “Occupying forces out” and “Where is Europe?”.</p> <p>The demonstration ended with detentions and police charging against protesters.</p> <p>Spanish authorities say the Catalan referendum is illegal, and they have been trying to stop it by seizing voting material — from ballot boxes to campaign literature and instruction manuals for manning voting stations.</p> <p>The Constitutional Court has suspended the vote after the central government challenged its legality. Spain’s central government says the referendum goes against the 1978 constitution which states Spain is indivisible.</p> <p>Polls show a minority of Catalans — though more than 40 percent — support independence, but a majority wants an opportunity to vote on the issue.</p>
no comment