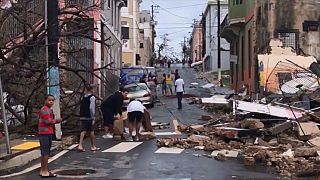 Hurricane Maria’s potency was captured on camera when the then-category 4 storm made landfall in the city of Guayama on Wednesday.

Smashing into Puerto Rico with winds of up to 250 km/h, Maria ripped the roofs off buildings, knocked out phones and electricity across the island and turned low-lying roads into swollen rivers awash with debris.

These are some of the images coming out of Puerto Rico. This is the town of Utuado. The island is devastated. pic.twitter.com/2eXaU8i28L

Uprooted trees and widespread flooding blocked many highways and streets across the Caribbean nation, and a 6am to 6pm curfew is in place across the country.

With most of Puerto Rico without means of communication, the full extent of the damage remains unclear.

The storm will move on from Puerto Rico and head towards the Dominican Republic later on Thursday, according to the National Hurricane Centre.