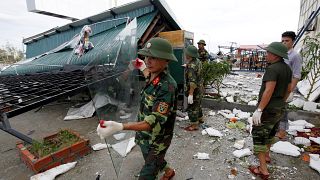 Updated: 16/09/2017
<p>People in parts of central Vietnam attempted to clean up and repair their homes and businesses on Saturday, after Typhoon Doksuri slammed into the area.</p> <p>The typhoon, one of the strongest in recent years, killed at least six people and cut off electricity for 1.3 million more, the Natural Disaster Prevention Committee said.</p> <p>More than 5,000 houses were submerged, 19 collapsed and nearly 24,000 houses in Ha Tinh, Quang Tri and Thua Thien-Hue provinces were damaged in winds that reached up to 135 km per hour, the disaster agency said in its Friday report.</p> <p>“The wind was so strong that I hid under my bed. I’m old, but I’m still afraid of dying,” Tran Ngoc Khang, a 70-year-old retired teacher, told <span class="caps">AFP</span> news agency.</p> <p>Vietnamese Prime Minister Nguyen Xuan Phuc visited the affected areas and has asked the army and police to assist the people with the damage.</p> <p>Tens of thousands of people had been evacuated and 250,000 troops deployed along Vietnam’s coast in anticipation of the typhoon’s landfall.</p> <p>Vietnam often suffers from destructive storms. Floods in the country’s north killed at least 26 people and washed away hundreds of homes in August. Last year, more than 200 people were killed in storms.</p>
no comment