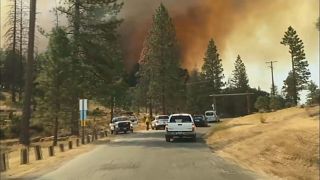 50 people have had a lucky escape after being trapped by a wildfire in California.

Officials say there were cornered for half an hour in Madera county, in the centre of the state, where blazes continue to rage.

At least three buildings were destroyed and hundreds more are now at risk; according to firefighters

Earlier, a separate fire forced the evacuation of three towns after more than 20 kilometres of land was devastated