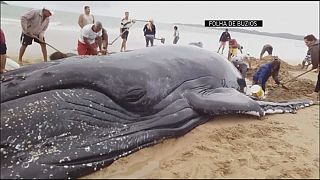 It was beached for over 24 hours, but on Thursday a humpback whale found its way back to the sea, thanks to a high tide and the rescue efforts of hundreds gathered on the beach of Praia Rasa, in Buzios, Brazil.

Using buckets and shovels, volunteers worked to remove sand from around the whale and douse it with water. The mammal was having difficulty breathing, but there appear to have been no wounds or marks indicating a collision.

Biologists at the scene said the whale was a juvenile, measuring 13.8 metres in length, and weighing between 10 and 15 tonnes.

Humpback whales migrate off the coast of Southern Brazil during this season, and this animal may have got lost or become separated from its family.