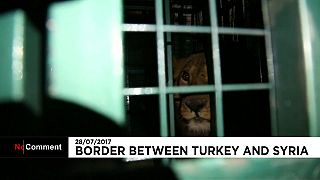 A pregnant lion was trucked into Turkey along with another lion and two dogs late on Friday after they were rescued from their damaged zoo in war-torn Aleppo.

Three lions, two tigers, two bears and two hyenas were the first ones to be brought to Turkey earlier this week.

This after they survived more than six years of intense clashes at the abandoned Aalim al-Sahar (Magic World) zoo.

The animals were taken to a rehabilitation centre in Turkey’s western province of Bursa.

The project was a joint effort between the Turkish environment ministry and international animal charity Four Paws.

Efforts to find new homes for the animals will kick off after they complete rehabilitation to help recover from their ordeal.