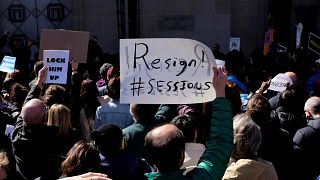 Protests erupt in the United States calling for the resignation of Senator Jeff Sessions as attorney general. The crowds chant “wretched ties. He said ‘no’. Sessions lied he’s got to go”.

Revelations about his meetings with Russian amabassador Sergey Kislyak came to light earlier this week. The Alabama Senator had previously lied about the matter under oath.