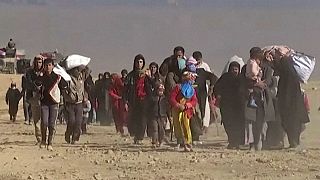 Hundreds of civilians, including women and children, have fled Mosul as Iraqi forces pushed deeper into the city.

Some said they were from villages outside Mosul and had been forced to march to the city more than four months ago to serve as human shields.

Iraqi forces last week recaptured Mosul airport, a key part of their bid to drive ISIL from the city.