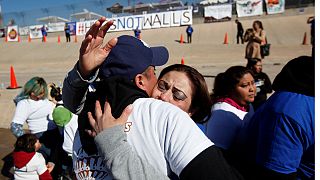 Mexico: hugs against the wall

In moving images set to emotive music in a changed world, thousands of Mexicans came together Saturday (January 28) along the banks on the Bravo river at the U.S. border to participate in the “Hugs Not Borders” event in which separated families had three minutes to enjoy each other without fear of deportation.

Some 380 families were able to participate in the event thanks to human rights groups in Ciudad Juarez and El Paso. This is the third such “Hugs Not Borders” event.

The event began at 9 am (1600 GMT), the NGO’s helped transfer the family members to the border as they awaited their reunion. The undocumented migrants in the United States fear risking deportation and so avoid visits back home.