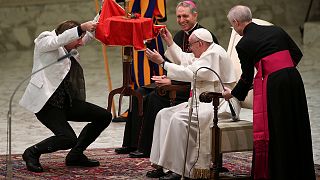 Pope Francis’s weekly general audience took a rather quirky turn on Wednesday December 28 when a circus was unleashed on the Vatican.

Delighting the Pope and the large crowds gathered in the Vatican audience hall, the circus troupe took to the stage towards the end of the weekly event and put on a fast-paced show featuring several exciting performances.

The Pope couldn’t help but smile as a clown handed him a balloon flower and as he took part in a trick that sent a table flying.