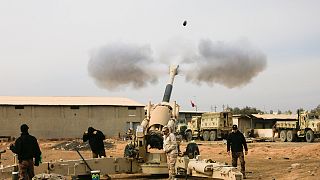 The Iraqi army has been pounding ISIL targets in Mosul, as part of their bid to drive out the group from the city.

The long-awaited attack aims to relieve pressure on Iraqi Counter-Terrorism Service (CTS) troops who have spearheaded the fighting in eastern Mosul for the last month and have come up against the jihadists lethal defences.