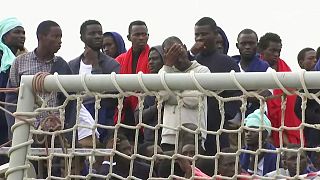 Almost 700 migrants were taken to the Italian port town of Augusta on Monday (November 7) after being rescued at sea by Italian and Spanish ships.

The migrants crowded on the deck of the vessel as it approached the port, where Red Cross personnel were waiting to assist them.

Over 3,000 migrants were rescued at sea between Saturday (November 5) and Sunday (November 6) as they tried to reach Europe and ten bodies were recovered, Italy’s coast guard said.