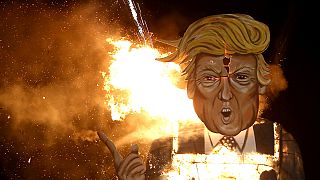 He turned ‘You’re fired’ into his reality show catch-phrase, but it was Donald Trump who went up in flames – or at least an effigy of him did – as part of the UK’s annual Bonfire Night celebrations.

An 11-metre-high model of the Republican U.S. presidential candidate was burned at a fireworks display in the town of Edenbridge, 50 km south of London.

“I think he would be quietly amused,” artist Frank Shepherd said of his muse.