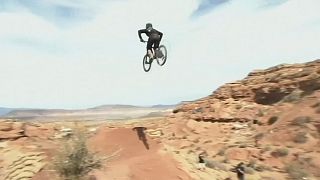 Canadian Brandon Semenuk flipped and flew his bike down a treacherous mountain course to win the 11th running of the Red Bull Rampage, his second victory in the event.

Semenuk scored a total of 84.33 points on his winning run to claim the top step of the podium with Antoine Bizet of France (81.00) finishing in second place and American Carson Storch (79.00) third.

The 21 riders taking part in the event each had two runs and were free to choose their own line down a steep slope filled with various jumps and ridges carved into the mountains just outside the small town of Virgin, Utah.