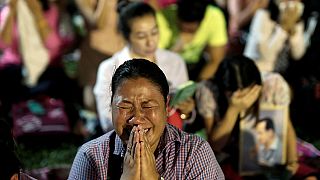 A woman fainted and many broke down with emotion outside the Siriraj hospital in Bangkok, after learning the news that Thai King Bhumibol Adulyadej had died.

Tears streamed down the faces of dozens of mourners, many holding pictures of the king, who had gathered outside in a vigil.

As Thailand awoke to nation without its beloved king, crowds took to the streets to mourn, forming large cues at the Grand Palace where they took part in a cleansing ritual.

Massive queues of mourners wanting to head towards the Grand Palace pic.twitter.com/C3JO4A34fs

Thailand’s Royal Palace said King Bhumibol, the world’s longest-reigning monarch, passed away peacefully on Thursday at age 88. Bhumibol Adulyadej became king in 1946 and was revered in Thailand as a demigod.

He was hailed as a father figure by his subjects, a beacon of stability that guided his country and people through decades of political turmoil and upheaval.

The sound of crying fills the air outside the hospital where the King died #Bangkokpic.twitter.com/OmsXzEYPkq

During his 70-year reign, the King saw 32 prime ministers, 20 new constitutions or charters and 16 coup d’etats or attempted coup d’etats.

Known for reaching out to the rural poor, King Bhumibol quickly became widely revered among his people – their love for him made stronger by the ruthless public relations machine at the palace.

The scene this afternoon beside Siriaj hospital

Criticism of the monarchy was forbidden under harsh “lese majeste” laws, which forbid both foreign and domestic news media to report in full on the royal family.

At times, these laws would come in handy for the king’s future successor, who is now expected to be crowned in the coming months.

The heir apparent, the three-times divorced Crown Prince Maha Vajiralongkorn, 64, famed for making his pet poodle an air chief marshal in the Thai military, has asked for privacy in a time of grief.

He has raised eyebrows in the past for his apparent lack of interest in the public duties expected of a Thai monarch.

The future king is not best liked by many of Thailand’s people.

In 2010, a leaked US diplomatic cable showed members of the Thai privy council discussing their concerns about the crown prince.