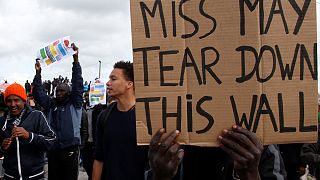 French riot police fired tear gas and water cannon at migrants and protesters who gathered in defiance of a ban outside the shanty town near Calais known as “the Jungle”.

About 200 migrants and some 50 protesters assembled under a bridge to protest against living conditions in the nearby camp that President Francois Hollande has vowed to close by the end of the year.

Police clashed with migrants as they pushed them back to the camp while activists threw stones at the security forces.