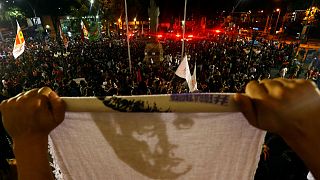 Brazilians watching television in a Rio de Janeiro restaurant shouted “Out Temer” and jeered as newly sworn in President Michel Temer addressed the nation on Wednesday.

Hours after Brazil’s Senate voted to remove President Dilma Rousseff from office, thousands of people marched in Rio to show their disapproval.

Chanting “Out Temer” as they marched, the peaceful demonstration made its way to the steps of Rio’s congress where they rallied against Temer’s new government.