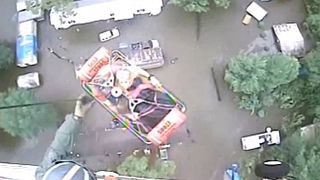 Among those rescued was a young boy, who was pulled from the roof of a home that had become almost completely submerged.

U.S. President Barack Obama issued a disaster declaration on Sunday (August 14) for flood-ravaged Louisiana, where at least five people have died and emergency crews have rescued more than 20,000 people stranded by unprecedented flooding.