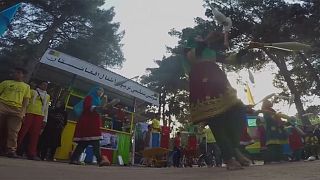 At the annual National Circus Festival in Kabul, members of the Mobile Mini Circus for Children (MMCC) are entertaining Kabul residents with a mix of juggling, acrobatics and music.

Unlike many traditional circus shows from around the world, there are no clowns or trained animals here.
Instead young children from the MMCC, a Danish-supported organisation, are bringing colourful performances.

This four-day festival was first initiated by the MMCC in 2008. The aim was to bring hope to thousands of Afghan children affected by the country’s prolonged war.