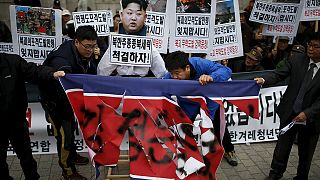 Updated: 24/11/2015
<p>Conservative protesters in South Korea held an anti-North Korea rally, including beating an effigy of Kim Yong-un.</p> <p>It was held in Seoul to mark the fifth anniversary of North Korea’s shelling of a border island which killed four people.</p> <p>The 2010 incident was one of the heaviest attacks on South Korean soil by the North since the 1950-53 Korean War.</p>
no comment