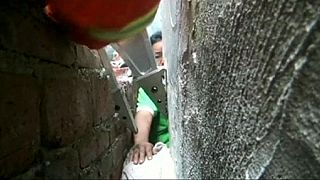 A seven-year-old boy trapped in a narrow space between two walls was rescued on Monday by firefighters in Yongzhou, central China’s Hunan province. According to rescuers, the boy got trapped between the two walls while chasing a duckling.

Firefighters rushed to the scene immediately after receiving the alarm. They used a hammer and an awl to knock off the bricks. In order to prevent any secondary injuries, they covered the boy’s head with a towel.

When the hammering reached 10 centimeters away from the boy, he could feel the vibrations of the wall as the firefighters were trying to knock down the bricks and started crying in pain. The firefighters then decided to move the walls apart by using a motored pump instead.

He was sent to hospital for a checkup but was released soon after.