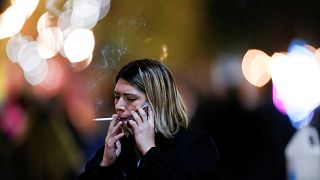 A woman smokes a cigarette outside a restaurant, before smoking was banned in public spaces according to a reform of the Mexican government's regulation.   -   Copyright  REUTERS/Daniel Becerril
By Euronews  •  Updated: 17/01/2023

Mexico has completely banned cigarette smoking in all public places - including at hotels and beaches.

Previously the smoking ban only applied to public transport, bars, workplaces and restaurants. From 15 January, the government has expanded the legislation to include all indoor and outdoor public spaces such as hotels, resorts, beaches, parks and anywhere that children might gather.

The only legal place to smoke tobacco in Mexico is inside private homes or private outdoor spaces.

The country now has one of the world’s strictest anti-tobacco laws. Tourists who smoke could face fines of between $50 and $300 (€46 and €277) for lighting up in public, according to Reuters. Those who refuse to cooperate with the ban could also face up to 36 hours in jail.

Regulations around electronic cigarettes and vapes have also been tightened. These devices can’t be imported, sold or used in public spaces in Mexico.

Where else should tourists watch out for smoking bans?

Mexico isn’t the only country with strict smoking laws. Ireland, Greece, Hungary and Malta already have similar restrictions in place.

Last year, Costa Rica also banned smoking in all public places including bars, restaurants and bus stops. The rule of thumb is, if you are exposing a stranger to second-hand smoke, you probably can’t smoke there.

But even if smoking in public is legal, in many countries there are some specific areas where you could face a fine for lighting up.

Some cities such as Barcelona have also banned smoking on beaches to stop cigarette butt littering. More than 100 of the country’s 3,514 beaches introduced a ban on 1 July last year including the Costa del Sol and Balearic islands.

The popular French Ski resort of Les Gets has also banned smoking from its entire communal area to keep cigarette butts from polluting the environment.

Which countries have strict laws for electronic cigarettes?

For anyone thinking they can get around restrictions by avoiding cigarettes, there are also destinations with strict rules in place for vapes and electronic cigarettes.

Vaping in public spaces is illegal in Colombia and Iran. In Turkey, it is illegal to purchase an e-cigarette. Possessing an e-cigarette in Singapore could land you a fine of $2,000 (€1395).

Australia requires you to have a prescription to have electronic cigarettes that contain nicotine - you could face huge fines if you are caught. Some states even give prison sentences for importing e-liquid with nicotine in it.

And some countries have also banned e-cigarettes and vapes entirely including Argentina, Brazil and Nepal. Vaping has been banned in Qatar since 2014 and breaking the law could land you with a fine of up to €2,467 or three months in prison.