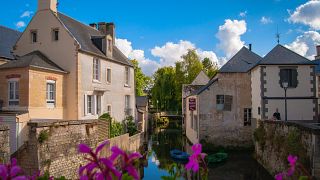 Over 500 million tourists visit Europe each year, but of which of its 44 countries do they choose to go to?

GlobalData, an analytics and consulting company, has crunched the numbers to find out which is Europe’s most visited country.

France has often claimed the top spot over the years, and now it is also set to reclaim its title as the most visited country in the world.

Which is the most visited country in the world?

Prior to the COVID pandemic, France was the most visited country in the world attracting 88.1 million visitors in 2019, according to GlobalData.

Spain claimed the top spot in 2021, but France is on track to overtake it, having welcomed 66.6 million international visitors in 2022.

“Alongside Italy and Spain, France represents a significant segment of the growth in Western Europe,” says Hannah Free, travel and tourism analyst at GlobalData.

“The country is not only popular with travellers from Europe itself - especially the UK, Germany and Belgium - but it is also popular with visitors from further afield, including China and the United States.”

GlobalData reports that the number of international arrivals in France is expected to grow at an annual rate of 12.1 per cent between 2022 and 2025.

The company has predicted that France will attract an estimated 93.7 million international travellers a year by 2025, cementing its title as the most visited country in the world.

Why is France a popular tourist destination?

One of France’s biggest draws is its transportation, according to GlobalData.

France is also well connected with other European countries via long distance and overnight trains.

New sleeper trains to be launched this year will take passengers from Paris to Vienna, Berlin and Milan while 2024 will see the capital connected to Barcelona too.

Which is the second most popular country in the world to visit?

Spain comes in close behind France in the ranking of most visited countries in the world.

While all countries saw visitor numbers plummet during the COVID-19 pandemic, Spain managed to beat France to the top spot having welcomed 26.3 million visitors.

It is set to follow France in attracting even more tourists in the next few years.

By 2025, Spain is expected to attract 89.5 million international visitors, according to GlobalData.

“Visitation to France and Spain will remain strong in the years to come, with festivals, culture and gastronomy being a big pull for tourists,” says Free.

“Both countries have a lot to offer visitors, with their own unique cultures, cuisines and atmospheres. Both countries are also relatively large, with a diverse and varied landscape, and each country has its own unique coastline.”