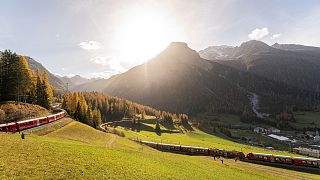 A Swiss railway company broke the record for the world’s longest passenger train on Saturday as part of celebrations for the 175th anniversary of railways in the country.

The train consisted of 4,550 seats spread across 100 coaches.

The one-off world record journey was organised by Rhaetian Railway and took around an hour. Rail enthusiasts lined the valley to watch the train wind its way about 25km through the Alps.

Where did the longest passenger train journey take place?

The 1,910m long passenger train travelled along the UNESCO World Heritage Albula/Bernina route from Preda to Alvaneu and over the Landwasser Viaduct.

It’s regarded as one of the most spectacular train routes in the world thanks to amazing Alpine views. It glides through many quaint mountain towns and takes in dozens of viaducts and bridges.

The world record attempt was organised to celebrate the 175th anniversary of Swiss rails but also to show off to the world the beauty of Swiss train journeys according to Dr Renato Fasciati, CEO of Rhaetian Railway.

"We had some troubles during the corona crisis (COVID 19 pandemic), so we lost 30 per cent of our turnover for guests on the train and so we tried to find a good event in order to increase the awareness of our beautiful UNESCO's World Heritage route. And so this world record attempt is a wonderful reason and a wonderful instrument for us to show the world this beautiful railway."

How was this journey possible?

The build up to the journey threw up numerous technical challenges.

Fasciati says controlling the carriages is key with such a long vehicle: "When you put 25 trains together, the signal must be enough so that the last train really gets the information from the first train and the train is not built for this operation and so we had to find a very pragmatic solution which is safe, but which helps us really to do this wonderful train."

The train will now be dismantled into its separate parts and they will be used for regular traffic.

This Saturday, 29 October, as part of the celebrations to mark the 175th anniversary of Switzerland’s railways, the Rhaetian Railway @rhaetischebahn will be attempting a world record with the longest passenger train in the world! ? https://t.co/sm1ok9WYsY

What was the previous record for the longest passenger train?

The previous record was set in Belgium by the National Belgian Railway Company in 1991. It measured 1732.9m and consisted of 70 coaches. It travelled 62.5km from Ghent to Ostend on a one-off journey organised in aid of a Belgian cancer research charity.

The record for the longest train of any type was set in 2001 by an Australian freight train called the Mt Goldworthy. It was owned by mining company BHP and clocked in at a whopping length of 7.24km. The overall tonnage of the train on the day the record was set was a staggering 90,475 tonnes.

Honest couple find €20,000 in a car park and return to owner