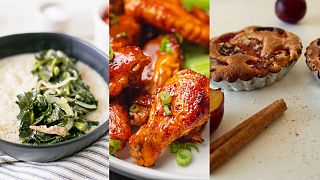 Think you know soul food? Today dishes like cornbread and fried catfish are enjoyed all over the world but their birthplace is firmly in the American South.

For dessert, there’s peach cobbler, banana pudding, pound cake and sweet potato pie. It’s all washed down with a red drink (the flavour can vary but it’s always red).

These iconic dishes are served up in quintessentially Southern restaurants all over the state of Alabama, which offer the classics with their own individual twists. You can try them at the Eagle’s Restaurant in downtown Birmingham which has been dishing out neck bones and oxtails since 1951, while at Martin’s Restaurant (one of the oldest establishments of its kind in Montgomery) the signature fried chicken is not to be missed.

In Choctaw County, make your way to Ezell’s Fish Camp where they have been serving up heaping plates of catfish, coleslaw and hushpuppies since 1930.

But where does soul food come from? It’s a story of slavery, migration and creativity in the face of oppression and one which is told on tastebuds across the globe.

What global influences can you taste in soul food?

In modern Alabama many historic sites tell the history of plantation enslavement and how the brutal system of southern agriculture gave birth to Southern food.

In these places white slave-owners controlled what the enslaved people ate, providing a calorie-controlled diet of starches like cornmeal, rice or potatoes, a small amount of smoked meat and a jug of sugar-derivative molasses.

“Slave holders completely tried to control what access enslaved people had to food,” said Adrian Miller, author of Soul Food: The Surprising Story of an American Cuisine, One Plate at a Time.

To supplement their food rations, enslaved Black Americans turned to foraging and hunting in their local environment. In this task, they were helped by Native Americans who traded with slave owners and were enslaved themselves prior to the establishment of the transatlantic slave trade. Many mainstays of the Southern diet are derived from corn, beans and squash, cultivated by Native Americans and established the original plant-based foundations of soul food.

Africans forced into slavery brought their own food traditions which were combined with Indigenous and European cuisine. The European connection is typically thought of as British but other influences include the Scots (who originally brought the fried chicken, now synonymous with Southern food to the Americas) and the French whose culinary fingerprints can be found in the Creole traditions of the city of Mobile, Alabama.

“Soul food is the bringing together of the culinary ingredients, traditions and techniques of West Africa, western Europe and the Americas,” said Miller.

While today we think of soul food as a monolith, its origins are place specific. From the Gulf Coast to the Appalachian mountains sources of ingredients and hyper local immigration patterns dictated what was on the plate.

Each influence from around the globe can be tasted in the dishes be it West African seasoning, native plants from the Americas or traditional British pound cakes which are now sold by family bakeries like Emily’s Heirloom Pound Cakes or Simply Sonequa. Even the red drink accompanying soul food is said to be a call back to hibiscus tea drunk on the shores of the African coastline.

How did soul food leave the South?

By the end of World War I, European migration to the United States had slowed. Coupled with the impact of men who left the workforce for war, this resulted in labour shortages in the industrialised areas in the Northeast, Midwest and West of the country.

Meanwhile, African Americans, who were mostly concentrated in the rural South as a legacy of slavery, were tired of poor living conditions and racist lawmaking.

Pulled by the promise of high wages and a better life, beginning in 1910, an estimated six million African Americans made the move to urban centres like Chicago, Detroit, New York, Philadelphia and out west to Oakland in what is now known as the Great Migration.

With the job opportunities brought by the rapid expansion of the arms industry a further three million Black Southerners moved to cities like Los Angeles, Seattle, Oregon, Washington and San Francisco between World War II and the 1970s.

As with any migrant community, Black families from the South took their food traditions with them across the country.

“Soul food is really the migrant cuisine of African Americans who left the South.”

Work by artists exploring themes of the Great Migration can today be seen at the Mississippi Museum of Art.

Once outside of the South, soul food began to change shape.

The proliferation of leafy greens which accompanied meat dishes were replaced with collard greens that travelled well, while industrial farming methods and higher incomes resulted in increased meat consumption.

These accidents of fate gave us the popular menu we see today, and at the same time, cooks were freed from the constraints of seasonal agriculture.

“Suddenly you could make peach cobbler anytime with canned peaches, you didn't have to rely on peach season,” said Miller.

He described soul food as the offspring of Southern food, which seeded many different genres of flavour and niche cuisines. While overall the soul food served internationally has a uniform quality, there are subsections of the now beloved comfort palette.

In states like Alabama, for example, barbecue is king with food joints like the historic Brenda’s Bar-B-Que Pit also acting as a meeting place for Civil Rights era activists.

Meanwhile, modern day soul food is taking a cyclical turn back to its plant-based roots.

“The sharpest trend is in the vegan and vegetarian space you’re seeing more plant-based interpretations of this food tradition which is a homecoming,” said Miller.

But with fried chicken on the menu from California to Catalonia, have we forgotten where soul food came from?

“One of the most vibrant conversations in these circles is the idea of appropriation,” said Miller.

“I think that anybody can make anybody’s food but just acknowledge where you get it from.”

Honouring the story of soul food while enjoying its authentic flavours can really only be done with a trip to the American South.

A visit to Brenda’s Bar-B-Que Pit or Eagle’s Restaurant will allow any tourist to sample a piece of history, and from Birmingham to Montgomery Alabama is the perfect destination for anyone wanting to experience the roots of soul food.

These rich culinary traditions have been centuries in the making and the stories and people behind them simply have to be seen, heard and tasted in person.