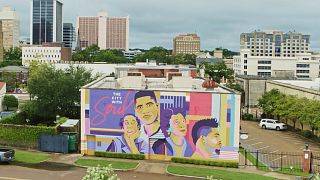 When visiting Jackson, Mississippi, one of the first things you’ll learn is how proud the city is of its unique role in the Civil Rights Movement.

“The power of place is a real thing,” said Dr. Robert Luckett, Professor of History at Jackson State University.

Jackson played a key role in the freedom rides of 1961 in which brave protestors challenged the segregation of interstate bus travel. These intrepid freedom fighters risked their lives riding the Greyhound buses of the American South with 329 of them arrested in Jackson.

“The atmosphere in Mississippi and in Jackson is rife with that history,” said Luckett.

“You had to empower people at the grassroots level first if you’re going to change anything.

“You can learn all about that here in Jackson.”

On the Jackson Civil Rights Trail you can see and hear the history of Civil Rights in the city, including the home of revered Civil Rights leader Medgar Evers.

Evers was renowned for his fights against the Jim Crow laws which suppressed African Americans in the South, fighting for the right to integrated education and speaking out over the brutal murder of teenager Emmett Till. It was a fight that ultimately claimed Evers’s life when he was shot in front of his own home.

“His gift was bringing everybody to the table for one mission and that mission was to bring truth and justice and equity to everyone,” said Keena Graham the Superintendent of the Medgar and Myrlie Evers Home National Monument.

Michael Morris
Director of Public Engagement at the Mississippi Department of Archives and History.

Legacy of the Civil Rights Movement in Jackson

Although the Civil Rights Movement is intimately tied to places like Jackson, it is also part of the national story of the United States, as well as being emblematic of struggles for equality around the world.

This place-specific but internationally relevant story is told at the twin location of the Mississippi Civil Rights Museum and the Museum of Mississippi History.

“The legacy of these museums is that it’s uplifting those ordinary folks that were able to get engaged in the fight for justice and I think that’s something that everybody can take something away from,” says Michael Morris, Director of Public Engagement at the Mississippi Department of Archives and History.