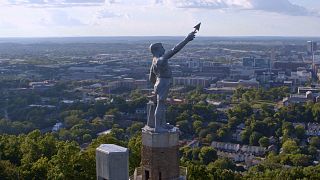 Birmingham, Alabama is a leafy monument to the Civil Rights Movement as well as an exciting up-and-coming city filled with culture and fun.

The city saw some of the worst violence of the Civil Rights period, as mass protests were met with harsh police tactics courtesy of police chief Eugene ‘Bull’ Connor.

The story is told in Kelly Ingram Park which will help visitors understand the struggle of local African-Americans against Jim Crow segregation.

The park was established after the Birmingham Mayor visited Israel in the 1970s and was inspired by the public telling of stories of the Holocaust.

“He became impassioned with the idea that if that story could be told in public to make the world a better place, then Birmingham had some storytelling to do as well,” said Barry McNealy, Historical Content Expert at Birmingham Civil Rights Institute.

Known as the place of revolution and reconciliation, Kelly Ingram Park was the site that young Birmingham residents marched through to reach the diner counters, department stores, and libraries they protested in.

Birmingham was known as the ‘Johannesburg of America’ due to its extreme segregation, and in 1963 this was epitomised in the 16th Street Baptist Church bombing perpetrated by white supremacists.

“This city at its most heartbreaking moment started to find a way past the hate that caused that heartbreak,” said McNealy.

“If people from around the world were to take anything from Birmingham it is the notion that change is possible.”

Culture, food and diversity in Birmingham

As well as history, Birmingham is also home to food, nightlife, and more for fun-loving visitors.

“This is a hidden gem, people are nice here. We've got great food, great beaches, great views, what else do you need?”, said comedian Jermaine ‘Funnymaine’ Johnson.

A recent addition to Birmingham’s landscape is the City Walk, a green, public underpass for residents to enjoy at their leisure. Meanwhile, the city’s many restaurants, bars and entertainment venues stand as a testament to its strength in diversity.

"It paved the way and showed that we can be better as a unified and diverse people when we take race out of things and just work, the possibilities are endless.”