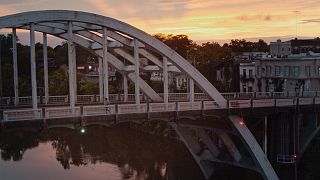 Alabama is home to food, fun and history; a state whose importance around the globe is secured by its Civil Rights Movement legacy. Alabama has a special place in the hearts and minds of African Americans and those who fight for equal rights the world over.

Montgomery is known as the ‘Capital of Dreams’ and it’s not hard to see why, as it is home to national monuments like the Dexter Avenue King Memorial Baptist Church and The National Memorial for Peace and Justice.

Perhaps the most famous Montgomery resident is Rosa Parks, the woman who kickstarted a movement when she refused to give up her seat on the bus in 1955.

“There’s so much more to this story,” said the local tour guide, artist and activist Michelle Browder who helped to design and paint Montgomery’s Black Lives Matter mural.

Parks’s brave determination led to ensuing action from groups like the Alabama Christian Movement for Human Rights (ACMHR) and, of course, Martin Luther King Jr. On her tours, Browder showcases the well-known markers of this action, as well as some hidden gems.

She wants people to be enlightened by history to ensure that the events of segregation and Jim Crow laws don’t repeat themselves.

“Going to all the museums is great but when you go to the actual communities I think you get a different perspective,” said Bowder.

All over Montgomery are the hidden meeting places that acted as community spaces and places of refuge and education during the Civil Rights era.

One such place that’s still standing - and serving up delicious southern cuisine - is Brenda’s Bar-B-Que Pit.

“They had secret meetings back here and people who didn’t know how to read or write, they tutored them,” said co-owner and granddaughter of the original proprietor, Monique Bethune.

Bethune’s grandmother was a leading activist who took part in the Selma to Montgomery March in 1965 and there’s plenty to learn at her establishment, as well as to eat; just don’t ask for the secret sauce recipe!

Meanwhile, the internationally recognised town of Selma has a history of its own to tell, as the starting point of the eponymous Selma to Montgomery March.

Here you can visit the Coffee Shoppe within sight of the Edmund Pettus Bridge. The bridge was the location of the infamous Bloody Sunday, when police brutally attacked protestors who were peacefully marching for their voting rights.

“We’ve served people from the four corners of the world…it’s quite an amazing testimony as to what Selma means to the world,” said the owner of The Coffee Shoppe, Jackie Smith.

How has the soul food menu changed over the years?