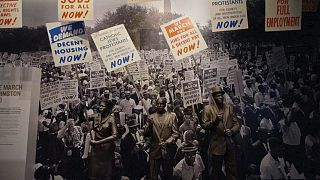 Alabama changed from the centre of segregation to the heart of the Civil Rights Movement.   -   Copyright  Euronews
By Tim Gallagher  •  Updated: 26/12/2022

But while Alabama is one of the best places to visit in the USA, the state has borne witness to some of the darkest moments in the nation’s history as well as its brightest triumphs.

The state capital Montgomery is where the original seven confederate states announced their secession and the state saw some of the most brutally suppressive segregationist policies as well as citizen-on-citizen violence against African Americans. This history made the state the home of the Civil Rights Movement due to the stringent segregation practices and the ordinary citizens who challenged the Jim Crow laws and won.

Today tourists from all over the world visit Alabama to experience or engage with history. In Selma, Alabama you can cross the world-famous Edmund Pettus Bridge, where brave activists withstood violence in the Selma to Montgomery March when they reached the Alabama State Capitol, or walk the solemn grounds of 16th Street Baptist Church, or even explore the aeroplane hangers where the famed Tuskegee Airmen trained at Moton Field.

One of the ways that Alabama stood out as a nexus for the Civil Rights Movement, and something which is still celebrated along the Civil Rights Trail in the state today, was the talent Black Alabamians had for organising.

In 1955, one of the most emblematic acts of the Civil Rights Movement happened in Montgomery when an African American woman, Rosa Parks, refused to give up her seat to a white passenger on a bus. Parks, a long-time secretary of the National Association for the Advancement of Colored People (NAACP), had seen the inequity in the city and her refusal was a well-timed opportunity to enact change.

Montgomery-founded group the Women’s Political Council (WPC), led by Jo Ann Robinson, sought to increase civic involvement in the community and increase voter registration. They had already been actively planning a bus boycott. After WPC appeals to city commissioners to change the unfair practices failed, Park’s arrest was the inciting event needed to launch their plan into action.

At this time Black women were also responding to the horrific lynching of Emmett Till in Mississippi, the images of whose mutilated body had shocked the world.

“He was one of many thousands of Black people that were lynched in this country and a lot of those lynching went unresolved, uninvestigated and unknown,” said Barry McNealy, historical content expert at the Birmingham Civil Rights Institute.

“The women in Montgomery showed their displeasure; they began to refuse to give up their seats on buses as a part of their push back.”

The momentous events of the Montgomery Bus Boycott are preserved in the Rosa Parks Museum, found in downtown Montgomery near the site of her arrest. The museum contains court documents and Park’s original fingerprint taken by the police as well as artefacts relating to her life. Other exhibitions highlight the role of strategising, group efforts and women in this vital act of resistance.

The WPC was far from the only organisation pushing for equal rights, with institutions like churches and colleges acting as key sites for civil rights organisers. A year before the Montgomery Bus Boycott, a young pastor was newly installed at Dexter Avenue Baptist Church - Dr. Martin Luther King Jr. He, along with Attorney Fred Gray, Reverend Ralph Abernathy and the Montgomery Improvement Association, continued the momentum established by the WPC, E.D. Nixon and others.

The NAACP, a key organisation in the Civil Rights Movement, was eventually outlawed in Alabama by June 1956. The Alabama Christian Movement for Human Rights (ACMHR) was then established by renowned Civil Rights leader Reverend Fred Shuttlesworth to continue the work. This group encompassed more than 60 churches, including Shuttlesworth’s own parish Bethel Baptist Church that served as headquarters for the ACMHR until 1961.

At the preserved site of Bethel Baptist Church visitors can sit in pews once graced by civil rights activists and see a short documentary about the life of Shuttlesworth, while tours of the buildings and grounds offer an insight into the daily difficulties of African Americans in Birmingham at the time.

“The idea of cohesiveness and institutionalisation where people already have a set way of doing things; that could just be utilised to work with the movement. You could work with them directly to achieve your goals,” said McNealy.

Check out a US National Monument in Birmingham

In 1962 the ACMHR combined forces with the Southern Christian Leadership Conference (SCLC), which was under King’s leadership. The formidable team began to plan peaceful protests against segregation in Birmingham.

“When they came together, they began something known as Project X,” said McNealy.

“They didn’t know what it was going to involve so they used the letter X to symbolise the unknown.”

On Palm Sunday in 1963, a march of 500 Black citizens set out from St. Paul Methodist Church. But police dogs were set upon them at the instruction of the notoriously brutal commissioner for public safety, Eugene “Bull” Connor. After this, Project X became known as Project C.

“They were going to confront both legal and de facto segregation anywhere they could find it in Birmingham.”

Kelly Ingram Park, which acted as a meeting place for activists and a flashpoint for police violence, now exhibits sculptures telling the story of Project C. Curious visitors can see the commemoration of protestors arrested by the police, jailed children and brave clergymen fighting for equality. An accompanying audio tour will fill visitors in on the high and lows of the Civil Rights Movement in the city.

During protests in Birmingham in 1963, King was arrested on Good Friday and white religious leaders addressed him in an op-ed published in a newspaper asking him to slow down. In response, he wrote the now famous “Letter From Birmingham Jail” on scraps of paper from his cell. Today, visitors can see the original cell door on exhibit at the Birmingham Civil Rights Institute.

“The last thing he was interested in was slowing down and trying to be conciliatory,” said McNealy.

Weeks after King’s arrest, on May 2 and 3, 1963, hundreds of Birmingham students secretly organised what became known as the Children’s Crusade to desert their classrooms at 11:00 a.m. to protest segregation and take their voices to the mayor’s office.

These peacefully protesting youths, some as young as six, were set upon by police dogs, beaten and sprayed with high-intensity water cannons. More than 2,000 children were reportedly arrested and hauled to jail on school buses, making that moment the first time any of them had been permitted to ride a bus due to Jim Crow laws.

“All of this was captured by the media and these images spread around the world,” says McNealy.

Later that summer, as Alabama schools were forced into integration, adversaries plotted to send a shockwave into the heart of America.

The unthinkable happened on Sunday morning, September 15, a day for youth leadership at 16th Street Baptist Church, when members of the Ku Klux Klan planted dynamite outside the church’s basement. The explosion killed Denise McNair, who was just 11, and Addie Mae Collins, Cynthia Wesley, and Carole Robertson, all aged 14. News of this atrocity made international headlines. From the rubble in Birmingham grew public outcry to galvanise the movement and led to then-President Kennedy calling for the passage of the 1964 Civil Rights Act.

Prior to Project C, King had led a campaign in Albany, Georgia. Due to the non-violent approach of the police force there, which was led by Laurie Pritchett, the action was unsuccessful.

“What Laurie Pritchett did is he had a campaign of being cordial to force Dr. King to try to go somewhere else,” said McNealy.

“When we start looking for somewhere else Fred Shuttlesworth is like [said] you don’t need to look anywhere except Bull Connor.”

Ironically it was the violent reaction of the Birmingham police force that showed the world the true nature of segregation, spurring on the Civil Rights Movement and aiding in its cause - something King was counting on. Segregationists, emboldened by violence that characterised the period, also bombed Bethel Baptist Church three times.

“The closer you are to the fire the greater your chances of fighting it,” said McNealy.

Visitors can also visit the Equal Justice Legacy Museum and the National Memorial for Peace and Justice to learn more about the harrowing history of lynching in the United States and the dangers of Jim Crow-era South. From an affecting sculpture on slavery by Kwame Akoto-Bamfo, through pillars carved with the names of victims of lynching, to Hanks Willis Thomas’s work on contemporary police brutality, this moving six-acre memorial brings their names and stories to light.

“Because of Alabama’s history, you had a group of people that had no choice other than to resist. They were pushed as far as they could possibly go.

“There was nowhere else to go but to push back.”

The resistance and tenacity of everyday citizens helped to change the world. Here in Alabama, you can follow in the footsteps of civil rights heroes, stand in the pulpit of Dr. King and even meet some of the eyewitnesses to history who share their stories today. A visit to Alabama is the trip of a lifetime and a celebration of the resilience of the human spirit in the pursuit of equality for all.

How has the soul food menu changed over the years?