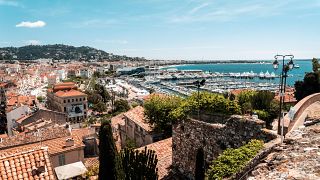 France is banning short haul flights between cities that can be reached by train in less than 2.5 hours.

The move is great news for the environment and it’s also an opportunity for travellers to discover more of the country’s stunning train routes.

With verdant vineyards, rugged mountain ranges and a sweep of Mediterranean sea to the south, France offers rail passengers plenty of breathtaking views.

Here are six of the best train journeys to take in France in 2023.

The line from Clermont-Ferrand to Nîmes is one of France’s oldest train routes.

Running through the granite and basalt mountains of the Gorges de l’Allier, its construction in the mid-1800s was a heroic feat of engineering.

The 303 kilometre route begins by winding through the lush volcano park outside Clermont-Ferrand.

From here, you head through the rugged gorge, crossing three historic viaducts and zipping through 106 tunnels.

The route climbs to La Bastide Puylaurent at 1,018 metres from where you can admire the wild beauty of the Massif Central opening up around you.

Ride the romantic ‘little yellow train’ through the Pyrenees

This sunny yellow train connects the stations of Villefranche-Vernet-les-Bains and Latour-de-Carol near the Spanish border.

You’ll want a window seat on the Petit Train Jaune which begins by rumbling through the mighty Pyrenees mountains.

Look out for two ancient fortresses and a monastery teetering on a mountain top.

Marvel at the Med from Marseille to Ventimiglia

For dazzling views of the azure Mediterranean sea, jump aboard the SNCF train running along France’s south coast.

This route is also one to do slowly in stages, stopping off at famed towns like glamorous Saint Tropez, Hollywood haven Cannes and pastel-painted Menton.

The trip ends at the Italian border where you might be tempted to simply turn around and do it all over again.

Hidden in Provence, France has its very own wild west replete with cowboys, ranches and wild bulls.

You can visit by taking a train from Nîmes and arriving 37 kilometres later at the coastal station of Le Grau-du-Roi.

The route takes you through the wild wetlands of the Camargue, a river delta where the Grand and Petit Rhône meet the sea.

Amongst salt marshes and lagoons, look out for the ‘gardians’ - the local cowboys - rounding up bulls on the area’s Indigenous white horses.

Keep an eye on the sky, too, where you might see a pink flamingo fly overhead.

Potter through Provence on the Train des Pignes

Travellers can see a more classic view of Provence from the Train of Pines, running between Nice and the mountain village of Dignes-les-Bains.

The train crosses an ancient arches bridge before pulling in at its destination.

After the three-hour journey, stretch your legs in the mountain hamlet where you’ll find stone houses blooming with bougainvillaea and shops filled with the scent of lavender.

If you’ve got a bit of time to spare in the capital, take a ride on Paris’ metro.

The journey from Bercy to Trocadéro takes you mainly overground giving you a makeshift tour of classic Parisian streets.

The train trundles over two bridges across the Seine: the Pont du Bercy and Pont du Bir Hakeim.

Look out for a glimpse of the Montparnasse Tower and the Eiffel Tower on the way, or people-watch for elegant Parisians about town.