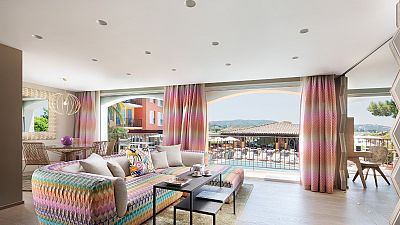 ‘But I’m working…. I’m working at being happy.' This line from iconic French movie And God Created Woman… by Roger Vadim (1956) best defines that particular laidback lifestyle typically associated with Provence. In the film, Brigitte Bardot - aged 22 at the time - plays Juliette, a young woman more interested in chasing life’s simple pleasures than to be cast into the mould of adulthood. As all the other characters try to repeatedly pin her down, she “works at being happy” by dancing mambo and seducing the local male population.

This particular movie crystallized a moment in French culture by propelling both BB and Saint Tropez, where most of the film’s action is taking place, into international stardom. Fun fact: the movie didn’t actually perform well in France but gained huge traction in the US where it was banned for heavy sexual connotation and nudity. This tiny and peaceful fishing harbour on the French Riviera soon became a celebrity magnet attracting the likes of Cher, Françoise Sagan and Mick Jagger. The rest, as they say, is history.

It’s in this particular context that businessman and art lover Jean-Prosper Gay-Para decided to build a magnificent hotel - supposedly to woo Brigitte Bardot. Taking inspiration from its native Lebanon, he called it Byblos after a village located nearby Beyrouth, and built it from scratch in the centre of town, filling it with precious artwork in the process. The first Palace of Saint-Tropez was born.

As it is often the case, reality came knocking. Gay-Para had to sell Byblos in a rush and return to Lebanon following the outbreak of the Six-Day War in June 1967. As for BB, she wasn’t available anyway. The Byblos dream landed in the hands of Sylvain Floirat - one of France’s wealthiest businessmen at the time. First hotel of his Groupe Floirat, he couldn’t imagine Byblos’ destiny and longevity.

Being familiar with the region and a French native myself, I had heard of Byblos before - it’s one of the most famous hotels in the country after all. In my mind, it resonated with ‘over-the-top jet-set parties’ and ‘exuberant, outrageously expensive, celebrity-style atmosphere’. Needless to say I was extremely curious to visit.

And where best to start than at recently launched Byblos Beach Ramatuelle, a beach club where ‘everyone is welcomed’ according to the hotel manager. “A sunbed here cost €40 per day and the guests of the hotel don’t necessarily have priority” he underlined. Ideally located on the most iconic stretch of sand of the area - Pampelonne beach - the place has already gained the status of a ‘see and be seen’ kind of club, months before summer kicks off.

Hazy summer light seeps through the open-air canopy warming-up the long wooden tables. Food on the menu is Mediterranean and created by Byblos executive chef, Rocco Séminara and award-winning pastry chef, Stéphane Marin. Expect fresh seafood and citrus-based salads, juicy pieces of meat that come smoking - directly from the grill to your plate under a glass lid - and extremely refined dessert made on-site in the open kitchen.

Sustainability-wise, you’ll be pleased to know that when summer ends the whole beach club closes down leaving no trace behind. Built entirely with plastic-free materials, the structure is ephemeral and was designed with the natural environment in mind. Given its location - Pampelonne is arguably the most popular beach in the area since the 50’s and the Bardot phenomenon - that is frankly reassuring.

Art and fashion: the Missoni experience

Another highlight of summer 2019 at Byblos follows the long-lasting collaboration of the hotel with Italian label Missoni. The brand renowned for its instantly recognizable colourful zig zag stripes has just opened the doors of its pop-up store within the walls of Cucina - the latest restaurant by Byblos. A fun shopping and dining experience to get you into the mood before hitting the exclusive nightclub Les Caves du Roy, also found on the premises.

Why not choose to stay in the Missoni Home Suite to go along with your Missoni dress? Or, does this work the other way around? One thing is certain, if you do you’ll be staying in one of the most fashionable spots on the Côte d’Azur - one that Kate Moss once called ‘home’. From rainbow-inspired bedding to concertina walls, flower power rugs to graphic lamps, everything here has been thoughtfully designed by the Missoni family. Overlooking the pool, it is the more spacious suite of the hotel (180 sq m) comprising of two ensuite bedrooms and living rooms in one giant space.

As for Cucina, the restaurant boasts a highly desirable (the temperature rarely drops under 28°C during French summer in this particular area except in the evening) open-air terrace framed by a vertical herb-garden, used by the kitchen every night. Inside, the decor is modern-contemporary with large bay windows and metallic industrial accents. A perfect dining-situation accompanied by a Italian menu by Alain Ducasse in which all dishes are freshly-cooked on the grounds. Next door to Cucina, you’ll find the Epicerie (food store) where you can take home some local delicacies selected by the team at Byblos. A true luxury gem for food lovers.

During the day, take time to admire the artwork disseminated around the property: some of it is simply stunning. Whilst exploring the grounds, I wondered what Brigitte Bardot truly thought of this place, a hidewaway that once looked like a Arabian palace. Near the reception area, you’ll find a corridor that gives you a clear view from above of the majestic floor ceramic by Jean Derval (picture below), which ornates the entrance of the spa. Around the hotel, you can spot romantic statues, wall embellishments and quirky details from the 50s and 60s, plus all the shades of pink under the sun. A feast for the eyes.

Slow living in the Var region

The last of the family-run French Palaces, a sense of conviviality radiates from Byblos - far away from its reputation of a jet-set hotspot (although during summertime it’s imaginably very much so). It’s cosy, full of charm, and the perfect spot for a long weekend done exploring the tiny village of Saint-Tropez and neighbouring towns in the Var region - Ramatuelle, Sainte Maxime, Hyères, Porquerolles...

To find more information and to book visit byblos.com