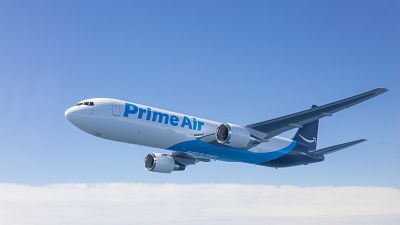 Your next Amazon order could soon be delivered with the help of recycled cooking fat.

Amazon Air, a cargo airline set up exclusively to transport Amazon deliveries, may be powered using ‘sustainable’ jet fuel. The e-commerce giant has just bought 27 million litres of sustainable aviation fuel (SAF) to keep its planes in the air over the next 12 months.

SAF is made from renewable resources, like plant or animal materials that are blended with conventional fuel. Amazon and the company manufacturing the fuel, World Energy, say the primary materials used will be cooking oil and the leftover fat from processing beef. Although it doesn’t necessarily produce fewer carbon emissions than pure fossil fuels when burned, it produces fewer carbon emissions over its entire life cycle.

Switching its fleet of more than 80 aircraft to sustainable fuel is part of a pledge made by Amazon last year to become carbon neutral by 2040. The pledge was made after employees called for Amazon to set specific goals to tackle climate change.

“Development of more efficient air cargo solutions is critical to achieving our goal of net-zero carbon across Amazon by 2040,” vice president of Amazon Air, Sarah Rhoads said in a blog post. “We’re already reducing carbon across our air network, from our ground operations—where we were the first to use electric main deck loaders in North America—to our fleet and network design.”

“Using sustainable aviation fuel is a natural next step, and one that calls for continued action. We encourage other companies to join us in the effort to engage with suppliers to create more fuel alternatives.”

How bad is flying for the environment?

Until other alternatives, like electric aircraft, become more economically viable, SAFs could help reduce the significant environmental impact of flying. According to the International Air Transport Association, around 363 billion litres of jet fuel was used last year. As a result of this fuel being burnt, aviation contributes 12 per cent of all CO2 emissions from transport and around 2 per cent of total global carbon emissions.

More than 40 airlines have now started using sustainable fuels in some way including testing alternatives made from algae. According to the Air Transport Action group, SAFs made from natural sources like these or from waste byproducts could reduce the carbon footprint of aviation fuel by 80 per cent over their full lifecycle.

Is Amazon reducing its carbon footprint?

In 2019 Amazon’s self-reported carbon footprint was more than 50 million tonnes and the transportation of its packages makes up a big chunk of this. Experts have calculated that the use of sustainable fuel in Amazon Air’s planes would cut this by 12,000 tonnes of CO2. That is a reduction of less than one per cent.

Although the reduction in CO2 for Amazon may prove just a drop in the water when compared to its overall emissions, it could stimulate the market for SAFs. These alternatives tend to be around four times more expensive than conventional jet fuels.

Research by Reportlinker has found that this price difference is preventing more companies from investing in the renewable fuel source. But, as more companies like Amazon switch over to sustainable options, the price could drop leading to more widespread adoption of the fuel.