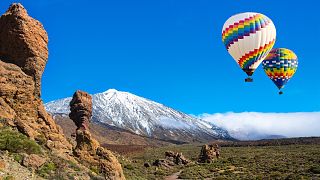 Just off the coast of Africa in the North Atlantic Ocean, this eight island archipelago is famed for its black sand beaches and rugged volcanic landscapes.

With Tenerife at its heart, the Canaries are a great holiday destination for surfers, food lovers and adventurers. Whether you want to spend your days eating at Michelin star restaurants, trekking through lush forests or simply relaxing on the beach, there’s something for everyone here.

How did the Canary Islands end up here?

The islands emerged from the Atlantic millions of years ago, creating a unique ecosystem thanks to the rich volcanic soil. If you drive from South Tenerife to the North, you’ll see a hot and stony landscape turn into a damp and lush forest.

Then, just a short hop across the North Atlantic waters, you can see the impact of this volcanic history in Lanzarote’s stunning and stark lava fields.

With so much to see and experience on these Spanish islands, we’ve divided our guide into different categories. So whatever you’re interested in, we’ve got your stay in this diverse archipelago covered.

What are the travel restrictions for the Canary Islands?

All visitors from the UK and Schengen EU countries must present their vaccination certificate - the Spanish government accepts the NHS vaccine passport - to show they have received both doses. If you are not fully vaccinated, you must show a negative PCR result taken in the last 72 hours in order to enter the Canary Islands. You can find all the current guidance here.

La Palma’s volcano Cumbre Vieja first erupted on 19 September and was followed by a 3.8 magnitude earthquake. The volcano has remained active ever since and is spewing ash and lava, which has destroyed over 1,100 buildings in the vicinity to date.

Villages close to the volcano have been evacuated. Tourists, however, can still visit the island and many hotels are still open for business.

Scientists are unable to predict when the eruption will end.

The best places to eat in the Canary Islands

If your heart is in your stomach, then you’ll soon be besotted with the Canaries. Tenerife is home to five Michelin star restaurants, including the two starred M.B run by chef Martin Berasategui. Located in the Ritz Carlton Abama Hotel, Berasategui is famed for his unique interpretations of Spanish cuisine, including influences from the Basque Country.

Meanwhile, if seafood is your passion, then head to Rincon de Juan Carlos’ self-named restaurant for a taste of the sea and locally-sourced ingredients. The menu changes regularly, you can expect to eat things like local striped shrimp, mackerel with bordelaise sauce, and grilled blackberry sorbet with pink pepper cream.

If you can’t stretch to a Michelin budget, there are hundreds (if not thousands) of places to eat delicious food in the Canaries on a more limited budget.

Teguise Market in Lanzarote is the island’s oldest and biggest market, taking place every Sunday from 9am - 2pm all year round. There are hundreds of stalls selling local crafts, bric-a-brac, and most importantly, local delicacies.

Thanks to its desert-like climate, the Canaries have become a great region for wine too. The black volcanic soil of Lanzarote traps heat, and means the grapevines really stand out against the stark landscape.

The Timanfaya National Park is where you’ll find the majority of the island’s grape growing. The island mainly produces full-bodied white varieties, often with citric notes, though complex reds are also produced, and can be sampled in the region's wineries.

The best places for nature lovers in Fuerteventura, Gran Canaria and Tenerife

If you’ve eaten at all those restaurants, you might be in need of some exercise. Luckily, the Canaries boasts some spectacular natural settings for you to walk, ramble and hike in, whatever your fitness level.

For a gentle walk, head for the tiny Isla de Lobos off the coast of Fuerteventura, also popular with surfers. You actually need a permit to visit this unique island. You need to apply for this three days in advance, which you can do here. Once you have it, you can hop on a boat and explore the island’s protected ecosystem. Once home to a colony of sea lions, the island features a small human settlement from 1865 as well as two lighthouses. You can also visit the Marrajo saltpans, and as the island is so small, you can easily explore the whole place in the four hours your permit allows.

If you’re visiting Gran Canaria, make sure to check out the Ruta de Plata. This trek is well-signposted and will take you roughly five hours to complete. Guiding you through pine forests, past lush succulents, the trek will also take you past the Roque Nublo, a now extinct volcano which once sat at the centre of the island. There are some spectacular panoramic views to be had too.

For those feeling very energetic, the experience of climbing Spain’s highest mountain is also up for grabs. At a lofty 3,718 metres high, El Teide on Tenerife is the third highest volcano in the world and a UNESCO World Heritage Site too.

Don’t embark on this hike unless you’re prepared and very fit, because the changes in altitude can be a lot to handle. For those who still want to experience the volcano but at a gentler pace, there’s also a cable car, which will take you directly to the top. Once there, you can look down into the El Teide crater.

Which is the best Canary island for watersports?

Fuerteventura is one of Europe’s most popular spots for surfing, kitesurfing and windsurfing. This is thanks to the island’s strong winds (as the name suggests) and 150km of soft white sand beaches.

The south of Fuerteventura (or ‘Fuerte’ as it’s known to locals) has good winds all year round, while the north has choppier waves for expert and amateur surfers. Fuerteventura is packed full of surf schools if you want to improve your skills, while it’s sunny all year round too, so you can relax and sunbathe between activities.

Which is the best Canary island for wildlife?

If you’re keen to see some wildlife, head to the smallest Canary Island, El Hierro. A World Biosphere Reserve since 2000, it’s one of the best places to dive, with underwater volcanic caves, cliffs and stunning marine life such as barracudas and dolphins. The island is also a great spot for whale watching, while on land there are intricate lava rock pools and rare ancient junipers.

Which is the best Canary island for hiking?

Seasoned hikers, meanwhile, should head to La Gomera, the second smallest island in the Canaries, and a World Biosphere Reserve since 2011. The island has over 600 kilometres of trails, which you can walk alone or as part of a guided tour with local experts.

The delicate ecosystem of the island has been well protected, making it a great location for eco tourists keen to explore the island’s biodiversity.

Garajonay National Park is home to an ancient prehistoric laurel forest, while along the coast there’s black sand beaches with clear blue waters.

What are the best beaches on the Canary Islands?

After all that activity, lying on a warm sandy beach is the best way to finish a holiday. The Canary Islands are full of beautiful beaches, from soft white sands, to volcanic pebble beaches and striking black sand bays. We’ve picked three of our favourites from the hundreds on offer to help you while away those sunny days.

The Canary Islands’ ‘hippy’ destination, this beach has been popular with backpackers since the 1970s. A naturist beach with smooth white sands, the beach has lots of local amenities, including restaurants and bars - though you might have to put your clothes back on first. Surrounded by mountains, there’s also a volcanic sand beach close by if you fancy a change of scene.

A stunning black lava beach with its own lagoon, Playa de El Golfo is a natural gem. At the bottom of a wind-carved cliff, there are plenty of dramatic rock formations to explore and photograph, especially when the waves crash into the jutting rocks.

Lago Verde - the beaches' green lagoon - is bright as a jewel in contrast to the black sands and surrounding rocks. Although the beach itself is quite small, it’s well worth a visit for the geographical wonders on display.

A huge beach, this stretch of golden sand is close to Corralejo, where many watersports fans stay. Stretching on for nine kilometres, the dune is like a slice of the Saharan Desert. The beach has calm turquoise waters and excellent views of the nearby islands of Los Lobos and Lanzarote.