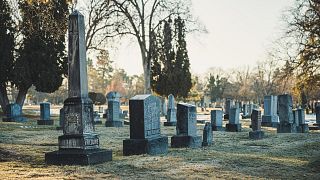 The end might be in sight for the COVID-19 pandemic but the consequences of the virus will still be felt many years into the future.

The pandemic has now claimed 5.9 million lives worldwide - though some scientists believe the death rate is actually much higher. Whatever the true number, COVID-19 related deaths have overwhelmed burial grounds leading to backlogs of bodies and mass burial sites around the world.

And now a new study suggests that the environmental impact of these extra bodies is threatening the living too.

What are the risks posed by dead bodies?

According to the study, published in Environmental Science and Pollution Research, cemetery contamination from the higher number of human losses during the pandemic may be affecting the surrounding urban environment too.

When a cadaver begins to decay, the decomposition process generates a liquid known as cemetery leachate.

The liquid ‘is rich in mineral salts and organic substances’ which are ‘highly toxic to living beings, and may also be associated with diseases such as cancer’ the study says.

While burial grounds were traditionally constructed away from urban communities - such as Victorian London’s ‘Magnificent Seven’ cemeteries - increased urbanisation has brought graveyards and human habitations closer together.

Metals from pacemakers, any jewellery the person was buried with and even varnishes and metals from the coffin itself can leach into the soil too.

Metals from pacemakers, any jewellery the person was buried with and even varnishes and metals from the coffin itself can leach into the soil too.

This process doesn’t happen overnight though. Cemetery leachate takes time to build up and generally only starts to be released from the decomposing body after three years.

The process is also dependent upon the climate of the burial ground too. Regions with higher temperatures and rainfall are likely to see higher levels of heavy metal pollution than others.

“A dead body weighing 70 kg will release 13 kgs of cemetery leachate as it decays. Think of a cemetery where hundreds of dead bodies are buried and how badly the soil and groundwater will get contaminated,” Alcindo Neckel who studied the metals in the soil of urban cemeteries in South Brazil, told Popular Science.

“This is not just a public health issue but also an economic problem of growing cities. At this rate, dead people are slowly poisoning those who are alive.”

What measures are in place to prevent contamination?

To reduce the risk of groundwater contamination, there are strict guidelines in many countries for the burial of bodies.

Burials must also avoid the water table - the depth below which the ground is saturated. In effect, this means that the grave site must not have any standing water in it once it is dug.

In Japan however, due to an ageing population and a lack of space, 99.9 per cent of bodies are now cremated, eliminating the issue of groundwater pollution entirely.

Such stringent measures are not always observed though, especially when a country is in a state of emergency. In India, during the height of the country’s second wave, many covid victims were buried in shallow mass graves close to the River Ganges, with many of the bodies re-emerging after seasonal flooding.

This raised health concerns among local populations, as diseases such as cholera can spread into waterways if bodies are not adequately buried.