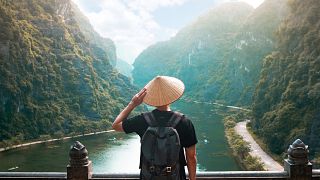 When the pandemic hit, travel stopped. Nearly three years on, most countries have opened up - but certain kinds of visitors are more welcome than others.

Countries are being more selective about the type of tourism they want, with nations like New Zealand expressing a desire for “high quality tourists” over budget travellers.

Earlier this year, the island country’s tourism minister reiterated a plan to attract wealthy tourists over those who campervan around the country “on $10 [€7] a day by eating dried noodles.”

Schemes to target rich travellers combat overtourism and safeguard the environment, the countries implementing them say. But does it mean budget travel is gone for good?

Here’s what countries favouring “quality” tourists are saying about their campaigns.

From next year, the Japan Tourism Agency has announced it will focus on bringing wealthy foreign tourists into the country.

The agency has said it will choose 10 or so “model” tourist sites and help develop their accommodation and resources.

The selected sites should already have high quality tourism resources but be ready to upgrade elements to suit the needs of affluent visitors.

The tourism agency said big spenders tend to stick to the three metropolitan cities of Tokyo, Osaka and Nagoya.

Iceland, the Cayman Islands and Montserrat reach out to rich remote workers

Some nations - like Iceland, the Cayman Islands and the Caribbean island of Montserrat - went a step further, limiting their schemes to wealthy workers.

Digital nomads hoping to relocate to Iceland for six months on the country’s remote-work visa programme need proof of a 1 million Icelandic krona (€6,625) monthly salary, or about €79,500 a year.

The Cayman Islands launched their Global Citizen Concierge Program (GCCP) in 2020. It allows remote workers to resettle in the British Overseas Territory on a two-year visa but only if their salary tops $100,000 (€98,666) per year.

The Carribean island of Montserrat began offering a Remote Work Stamp in February 2021 that allows digital nomads to work from the country for a year. The only catch? Your annual earnings must be upwards of $70,000 (€69,000).

Tenerife is looking to lure “quality” tourism going forward as opposed to quantity of visitors.

Its visitor numbers have reportedly returned to almost pre-pandemic levels so the country is focusing on the type of tourism it attracts instead.

The country wants to target visitors that come to learn about culture, heritage and gastronomy, not just for the beaches.

The Netherlands is similarly looking to attract what its tourist board calls “valuable tourism.”

“We focus on target groups that contribute economically, socio-culturally and ecologically to a thriving destination and fit within the carrying capacity and identity of the area,” says Conrad van Tiggelen, Director of Branding & Strategy at the Netherlands Board of Tourism & Conventions.

Although the board wants to encourage tourism that supports the local economy, van Tiggelen adds that,” we do not relate the value of visitors to expenditures only.”

In 2020, Nash declared New Zealand was seeking the type of tourist who “flies business class or premium economy, hires a helicopter, does a tour round Franz Josef and then eats at a high-end restaurant.”

Are higher spending tourists better for the environment?

“We’ve found that it’s really not true that higher spending visitors are better for the environment,” says Jeremy Sampson, CEO of the Travel Foundation.

“It’s much more nuanced: the costs of servicing tourist demand have not been well understood.”

The foundation conducted some research in the Canary Islands, for example, on the impact of the luxury market on the environment.

“We found that the five star visitors were bringing a much more significant cost in terms of environmental resources,” says Sampson. “The luxury hotels were using more water and energy and had more waste management requirements.”

Sampson also says that the notion that higher spending visitors are better for the local economy is also not always true.

“While five star visitors might generate more income overall, that income is often not spread out very well across the community,” he says.

In contrast, people who stay in short term rentals spend less but in more diverse and local businesses.

Sampson feels budget travel is definitely not going to become a thing of the past.

“I think that the idea that one visitor segment is inherently undesirable is quite flawed,” he says.

“It’s about finding balance and understanding that each segment has both costs and benefits.”