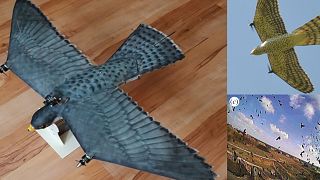 Tired of flight delays? This new drone predator could help, according to international researchers.   -   Copyright  University of Groningen
By Charlotte Elton  •  Updated: 26/10/2022

Is it a bird? Is it a plane? No, it’s the RobotFalcon!

It might sound like the alias of an evil bird android, but the RobotFalcon is actually an ingenious new way of preventing unnecessary flight delays and cancellations.

Built by a team of Dutch researchers, this cutting edge tech takes the form of a robotic peregrine falcon. It is designed to scare birds away from busy runways.

“The RobotFalcon is a practical and ethical solution to drive away bird flocks with all advantages of live predators but without their limitations,” the University of Groningen team conclude.

This canny avian predator might one day patrol runways around the world.

What are bird strikes?

Globally, around 50,000 bird strikes are recorded per year with around five per cent of these causing some damage to the aircraft.

But the RoboFalcon might be able to prevent these collisions. Researchers are testing the prototype drone’s ability to chase away corvids, gulls, starlings and lapwings.

So far they have found that it does so quickly and effectively - and it could also be used to chase birds away from crops.

The falcon will be a “valuable addition to the toolbox” for air traffic control, the researchers write.

Bird strikes can be deadly, but fatalities are rare. There is roughly one bird strike fatality per one billion flying hours.

The phenomenon is nonetheless dangerous. In 2009, pilots were forced to land an Airbus A320 on the River Hudson after the plane struck a flock of birds.

The subsequent landing - in which all 155 people survived - was dubbed the ‘Miracle on the River Hudson’ and made into a movie starring Tom Hanks.

And in 2019, a Ural Airlines flight had to crash land in a cornfield after a bird strike with74 people sustaining injuries.

If your flight is delayed by a bird strike, what can you do?

Under EU flight delay law, airlines don't have to pay compensation for delays caused by "extraordinary circumstances which could not have been avoided even if all reasonable measures had been taken."

Unfortunately for travellers, ‘birdstrikes’ count as an “extraordinary circumstance.”