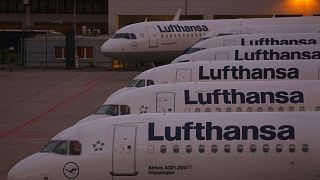 Workers found the body yesterday after the plane was moved to a hangar.   -   Copyright  REUTERS/Kai Pfaffenbach
By Euronews Travel  with Reuters  •  Updated: 28/10/2022

A dead body was discovered in the undercarriage of a Lufthansa plane that arrived at Frankfurt airport from Tehran on Thursday, German newspaper Bild reports.

Workers found the body after the passengers of flight LH601 had left the aircraft and the A340 aircraft had been moved to a hangar for maintenance.

The same flight scheduled for Friday has been cancelled, according to Lufthansa's website.

The undercarriage refers to the area of the plane below its main body (or fuselage) and wing section.

It’s rare for people to survive long journeys there due to the extreme conditions they face, including frostbite and being crushed when the landing gear retracts.

The distance from Tehran to Frankfurt is approximately 3,768 kilometres.

What is happening in Iran?

The incident comes amid widespread unrest in Iran, ignited by the death of Mahsa Amini.

The 22-year-old Kurdish Iranian woman was detained by the Islamic Republic's morality police for "improper attire" and died in police custody on September 16.

40 days on from her death, tens of thousands of protesters gathered at Amini’s grave on Wednesday, as the movement for “women, life, freedom” refuses to back down.

Lufthansa and federal police declined to comment on the incident at Frankfurt airport. Frankfurt police were not immediately available for comment.