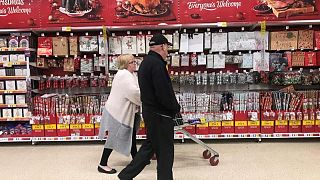 Football's unseasonal winter World Cup has added a new level of uncertainty to the Christmas trading outlook of Britain's supermarkets: How do you persuade cash-strapped shoppers to buy yule logs and luxury biscuits at the same time as beer and pizza?

Under consumption is not normally a concept associated with the UK, especially during major sporting or holiday events but the beleaguered pound and the country's economic outlook has changed perceptions, and matters on the ground for millions.

Running between Nov. 20 and Dec. 18, the football tournament in Qatar falls directly in the key festive trading quarter where the fiercely competitive sector typically makes a large chunk of its annual profit.

However, confidence levels among shoppers were at record lows even before the government's, now reversed, new economic plan sent mortgage rates surging and sparked fears of a sharp drop in house prices to compound the cost-of-living crisis.

That means combined spending is likely to be less than if the two events were months apart.

Retail executives say the World Cup, moved to the winter to avoid the intense Qatari summer temperatures, has totally thrown the algorithms they increasingly use to predict trading and plan their logistics.

"It's a nightmare timing from getting any upside out of it," said one grocery industry veteran, speaking on condition of anonymity.

"It's also an executional headache, because right when you want to have everything Christmas out, you've got to somehow reflect slabs of booze and snacking for the World Cup," he said.

There is also a danger that people, distracted by the football, do not feel festive and do not turn their attention to Christmas spending until after the tournament, leading to a frantic final week of trading, he said.

"This is a bit of a curve ball in terms of how do you plan Christmas and a World Cup at the same time," Ken Murphy, chief executive of Tesco, Britain's biggest retailer, told reporters this month.

Another factor will be if England's poor recent form continues and they fail to progress beyond the initial group stage of matches. For now supermarkets are setting out their stores on the basis that England, and Wales, who have also qualified, do well.

But they have a Plan B where space devoted to beer, snacks and soccer merchandise can be quickly replaced with Christmas Champagne, Prosecco, gifts and decorations when the home nations exit.

However, executives say planning is further complicated by legislation that came into effect in England on Oct. 1 restricting the location in stores of foods high in fat, salt, or sugar.

The new rules mean that products considered less healthy, such as confectionery, cannot be featured in key store locations, such as entrances, checkouts, aisle ends and their online equivalents.

Tesco plans dedicated signage in stores to alert customers to products and deals on offer for football celebrations. This will be separate to the dedicated space for Christmas products.

During the last World Cup in July 2018, which coincided with a prolonged period of hot weather, shoppers visited UK supermarkets an extra 13 million times, according to market researcher Kantar.

Excluding Christmas and Easter weeks, the July 2018 week that England defeated both Colombia and Sweden saw more spent on alcohol than ever before - some 287 million pounds, it said.

Similarly, shoppers spent around 1.2 billion euros on alcohol at supermarkets during last year's Euro 2020 soccer tournament, delayed by the coronavirus pandemic, in which England reached the final at London's Wembley Stadium.

Of course, customers visiting stores to buy festive goods could buy in World Cup supplies at the same time. But with household budgets squeezed, supermarket chains are bracing for less of a sales bonanza.

"It's not going to be as big as the summer World Cup, that is clear," said Fraser McKevitt, head of retail and consumer insight at Kantar.

But he said a potential silver lining for supermarkets could be that Britons eschew bars and instead watch more matches at home, with the necessary refreshments.

For now executives are putting on a brave face.

"If one of the home nations performs it could make for a really interesting celebration," Giles Hurley, CEO of discounter Aldi UK said.

"I'm actually very confident that the British public will celebrate this Christmas."

A lot will depend on how deep England go in the tournament.

"What we know with other events and most recently the women's Euros, is it very much depends on England's performance," said Kantar's McKevitt.

"If England do well, the watching and the celebrating and the purchasing will build."

As ever, market leader Tesco looks best placed, with a foot in both the retail and wholesale market.

Cost of living crisis: What energy prices does the EU want to cap?