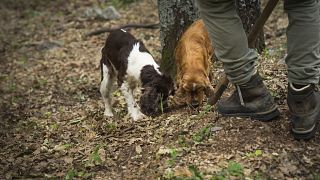 It’s autumn in Piedmont and in the town of Roddi, not far from Italy’s famous UNESCO winemaking region of Barolo, truffle season is underway.

Beyond the grapevines, 'trifolao' Gianni Monchiero, and his dogs, Lady and Vicky set off to search for these elusive little tubers. The most prized for its distinct earthy and musky scent is the pale yellow Alba, or Acqualagna white truffle, known locally as 'grey diamonds'.

Spotting signs of a truffle takes great skill and teamwork. The tubers can be buried at a depth of up to one metre under the marly-chalk soil and near the roots of certain trees, particularly oak. Humans can only find them with the help of a 'digging animal' with a great sense of smell.

“This type is called a Scorzone (a summer truffle)," explains Monchiero, scooping out a small dark tuber with a rough and warty bark from his pocket.

Pulling out two more he explains; "this one is a white truffle and this one is a Brumale (a black winter truffle). If you smell them they have three very different scents.”

Extracting the tuber from the earth is also delicate work, as one wrong stroke with the hoe and the truffle can be broken.

Roddi is so well renowned for its truffles, it's even got its own Truffle-Hunting dog university, which puts puppies with the best stamina and sense of smell through an intensive three-week training course.

The University was founded informally in 1880 and made official in 1935 during the 5th Alba White Truffle Fair.

Held every weekend in October and November the fair showcases the best Italian gastronomy and hosts an immense truffle market where the tubers are sniffed, weighed and valued by specially trained Alba White Truffle Sensory Analysis judges.

Cookery demonstrations are also part of the experience and renowned chefs create inventive dishes in front of an audience, eager for truffle.

As for what to look for in a truffle dish; "It's very important that you put a good white truffle on something hot so the heat of the dish brings the smell of the truffle up to your nose," says Michelin-starred Palma based chef Terry Giacomello, who's demonstrating how to make vacuum-dried egg white pasta, topped with white truffle shavings and egg yolk.

Giacomello believes that the best food to compliment the white truffle is scrambled eggs; "it has everything," he says, "because it's creamy and the truffle is dry, it has a very neutral taste and because there is the fat."

"White truffles are 99 percent smell," he explains. "There is almost no taste, so they seem like paper. But the smell of the white truffle comes from an essential oil which needs to be melted into something fat to distribute the smell all over your taste buds. So the eggs have everything, they are creamy, fat, neutral tasting and hot."

Giacomello dishes out his creation to his audience, who can purchase an extra shaving of white truffle at a price of twenty euros.

Whilst Alba's event is one of the largest truffle fairs in Italy, in the province of neighbouring Asti, Italy's smallest town, Moncalvo, holds its annual 'Fiera del Tartufo,' - the oldest in the country- on the last two Sundays in October.

And around the medieval streets of Asti, home to Italy's oldest bare-back Palio horse race and the Asti Spumante sparkling wine, street food festivals are underway with top local chefs like Diego Bongiovanni showing off his favourite truffle recipes.

In restaurants around Asti and Alba, the white truffle is the top of the menu with portions of the tuber weighed and grated over your dish and served alongside a bottle of Nebbiolo.

The region also has many famous cheeses, such as the goat cheese, Robiola Di Capra Fresca, the cow's cheese 'Sola' named because it resembles the sole of a shoe when it ages, and the Castelrosso, or Toma Brusca, a cheese made from a cow that has become so stressed by being taken up the mountain in summer that their milk becomes temporarily acidic. Only a few wheels of it are made every year and it's considered a 'cheese of emotion'.

Back in the forests around Roddi, truffle hunter Gianna Monchiero is retiring for the day with several new tubers of various shapes and sizes in his pocket.

He may end up grating his treasures into a plate of 'tajarin' (egg pasta) back at home, but it's more likely that they will end up being sold at a truffle fair.