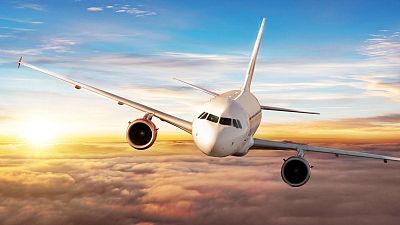 Just a few changes to our flying habits would be enough to partly reverse global warming caused by the aviation industry. According to a new study, if we were to reduce air traffic by just 2.5 per cent each year, warming will consistently level off over the coming decades.

Report author, Milan Klöwer, from the University of Oxford and colleagues from Manchester Metropolitan University calculated that to date, aircraft are responsible for 0.04C of global heating. This is about 4 per cent of the 1.2C temperature increase humans have caused since the Industrial Revolution.

If aviation continues to grow at about 3 per cent a year then it will have caused 0.09C of heating by 2050.

Mr Klöwer warns that as world leaders and delegates at COP26 haggle over targets to limit global warming to 1.5°C, aviation is unlikely to be included in them, given the lack of low-carbon alternatives to long-haul flights

Sustainable aviation fuels, and hydrogen or electric planes, are being developed, although the climate scientist believes that none of these technologies are currently available at the necessary scale. He says that at the current rate, the world will have warmed by 2°C within three decades.

On Monday British Airways' first flight to the newly-reopened US departed for New York. It was fuelled by a 35 per cent blend of sustainable aviation fuel (SAF) provided by BP and made from used cooking oil.

According to BA, it's the first commercial transatlantic flight ever to be operated with such a significant level of the fuel blended with traditional jet fuel. The flight was also carried out by the airline's most fuel-efficient long-haul aircraft, the A350, making its overall CO2 emissions more than 50 per cent less than its now-retired 747 aircraft, the company said.

"We will see short or very short-haul electric flights soon. Airbus is also making great progress on hydrogen". However, according to Mr Goodwin the developer of the famous Rolls Royce engine recently told him, "if the engineers were just given the money to get on with the job, they would have hydrogen-powered aviation in the near future."

Resolving to fly less can also contribute considerably to reducing the number of unnecessary flights, says Mr Kloewer and Mr Goodwin agrees: "People need to think about holidaying closer to home and see what's available in their own country."

Individual travellers should also try to take direct flight, and just take hand luggage rather than checking in bags to reduce the aircraft's weight.

"Fly with the budget carriers in the more modern planes then carbon emissions will go down. Any traveller can now look up the most carbon-efficient flights on Google."

"I've had a look at some of those and the majority of them, the most carbon-efficient, are also the cheapest".

For countries like the Gambia or the Caribbean islands, losing the opportunity to travel by air is a real existential threat for them

On current trends, Mr Goodwin believes that by 2050 the aviation industry will be subject to serious regulation.

The risks to the aviation industry and for travel and tourism, in general, are extremely serious; "For countries like the Gambia or the Caribbean islands, which are highly dependent on tourism, losing the opportunity to travel by air is a real existential threat for them".

Mr Goodwin suggests that we only fly once a year and make it a longer trip, rather than lots of short trips.

"Look at the way the Japanese travel. They come to Europe, they do several different European countries and they stay for a while. It's that kind of approach.

The group of travellers that concerns Mr Goodwin the most are those on zero-hours contracts or short term contracts, who are "very prone to travelling short notice on short hall on European city breaks. They generally fly because they have no paid holidays". A three week holiday for them is "not an option."

"I think we need to think about how the travel and tourism industry works to try and encourage a proper holiday structure for people so they can travel for longer."

The 'big difference' of train travel

In his study, Mr Klöwer suggests that politicians should shift subsidies from flying to more sustainable modes of transport, such as train journeys.

"Travelling by train is not such an issue in Europe," says Mr Goodwin, "but it's a big issue in the UK because we just don't have the rapid transit available".

"In China and Japan, where the bullet trains are operating, it's really quick. There are a lot of people not using flights anymore, including tour operators. Those changes will make a really big difference".

"If you look at Intrepid, they are doing all the transfers within the itinerary for their travellers. But without flying.

One travel company that's stepping up is No Fly Travel Club. As the name implies, they organise trips that don't involve any flights.

Itineraries mostly use high-speed rail thereby helping customers to shrink their carbon footprint by 70 per cent. Weekend breaks include exploring Mediterranean Marseille, a night-train adventure to Vienna and wine tasting in the Loire Valley.

Founder Catherine Livesley said that when people want to take a city break, pre-pandemic, "just hopping on a plane becomes the default option" because train travel can be confusing to organise and people aren't aware of all the great places you can reach by train.

A post shared by No Fly Travel Club (@noflytravelclub)

In designing their trips the company looked at how straightforward the journey would be: "Not necessarily how long, but how many connections and with most places there is only one change".

"Also the cities or locations have a lot of small businesses that are sustainable and you can make your own decisions while you're there, such as eating organic food or buying local produce".

These can often be as quick as flying to your destination. "For example, the train to Marseille takes roughly seven hours and by the time you've got to the airport and flown there, the time works out more or less the same, and the price doesn't work out that different, either," says Catherine.

There's no point having a sustainable city break that only millionaires can afford.

Prices for the trip start from €450 per person and go up to €800-900 per person. "Some are slightly more high-end, but there's a range of prices because we really wanted it to be accessible. There's no point having a sustainable city break that only millionaires can afford".

How can we change our travel habits?

Firstly, there needs to be more awareness of the options available to us, says Catherine. "In the UK we're so fortunate to be plugged into this network of European rail. You can reach so many destinations in less than a day's travel and I honestly don't think people know that".

"Unfortunately, [UK Chancellor of the Exchequer] Rishi Sunak's decided to provide more subsidies for domestic flights. But it would be possible to make rail travel cheaper if governments decided to move in that direction".

Part of what No Fly Travel Club does is campaigning on these issues and raising awareness at the government level of what can be done to help people choose lower carbon types of transport.

"We work with flight free UK and other campaign groups, but at the moment it's about generating awareness of this problem".

"We need to give people these choices and not just default to the airlines being the voice of authority on aviation".

The Glasgow Declaration: Can tourism really cut its emissions in time?