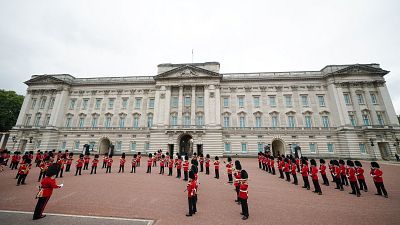 British soldiers in their iconic red uniform and bearskin hats paraded outside Buckingham Palace on Monday as the Changing of the Guard ceremony resumed after an 18-month hiatus.

Soldiers had maintained sentry duty outside royal residences during the pandemic but the ceremony, which is popular with tourists, was abandoned at the start of Britain’s lockdown.

Hundreds of spectators lined the gates outside the palace to watch its long awaited return. The military band played tunes saluting British success at the Tokyo Olympics, including the theme from “Chariots of Fire'' and Spandau Ballet’s “Gold.”

Now it’s back, visitors can enjoy the ceremony every Monday, Wednesday, Friday and Sunday, starting from around 10:30am.

What is The Changing of the Guards ceremony?

Household Troops have guarded the monarch and their residence since 1660.

The Changing of the Guard is a ceremony in which the soldiers currently on duty, the Old Guard, exchange places with the New Guard.

To start the ceremony troops from the Old Guard march from St James’ Palace, up The Mall, to Buckingham Palace. Upon their arrival they join the rest of the soldiers currently on duty outside the palace to await the New Guard.

After a full inspection the New Guard and their band leave the Wellington Barracks, situated to the south east of Buckingham Palace, and march into the palace’s forecourt.

As the band plays, the New Guard advances towards the Old Guard and they ‘Present Arms’ (salute with their rifles). The Captain of the Old Guard then hands over ‘the key to the Palace’ to represent the transfer of responsibility for the Palace’s security.

Once all the sentries have been replaced and the Old Guard is all together, they march back to Wellington Barracks with the band.

Has the ceremony changed due to COVID-19?

The ceremony has resumed in it’s full pre-COVID glory.

However, spectators are encouraged to follow COVID-19 guidance as if they were attending any large event. This includes:

Are they real soldiers?

The guarding of the Queen and therefore the Changing of the Guard is performed by the Household Division of the British army. These are all active and highly trained soldiers, many of whom have served on active tours across the world.

The Household Division is made up of a number of regiments which includes The Life Guards, The Blues and Royals, Grenadier Guards, Coldstream Guards, Scots Guards, Irish Guards and Welsh Guards. You can read more about each of the regiments and their history here.

These guards are an iconic London image with their scarlet tunics and tall fur hats, called bearskins. The hats are made from the fur of Canadian black bears which are culled each year in efforts to keep their numbers under control.

Although all footguards wear this uniform, you can distinguish which regiment they are from by the colour and position of the plume on their bearskin.

The foot guards at Buckingham Palace are often mistakenly called Beef Eaters, however that term actually refers to those at the Tower of London who wear an equally iconic, but entirely different uniform.

Watch the video above to see the Changing of the Guard return from its hiatus.