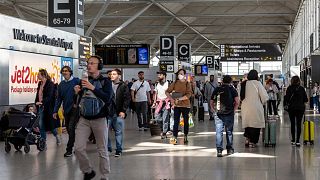 Staff at London Stansted - one of the UK’s busiest airports - are voting on strike action that could cause major disruption for passengers.

More than 1,000 workers including security staff, cleaners, maintenance staff, airport ambassadors and firefighters are taking part in the vote. It opened on 26 August and will end on 19 September when they will decide whether to go on strike or not.

Unite union says that strike action would cause “significant disruption” and “could even close the airport” because of the vital work carried out by the staff taking part in the vote.

During the pandemic, airport workers agreed to a year long 10 per cent pay cut. This was then extended by three months at short notice. Unite points out that pay during the same period for executives at Manchester Airport Group (MAG), the company which owns Stansted, increased by 23 per cent.

An initial offer of a 7.5 per cent pay increase and a one off £250 (€290) payment by MAG was overwhelmingly rejected by workers, the union adds.

“Stansted and MAG expected our members to make financial sacrifices during the pandemic and they expect them to do the same thing now during the cost-of-living crisis,” says Unite general secretary Sharon Graham.

“Everyone is expected to tighten their belts except MAG’s rich executives. Our members won’t stand for it and they will receive Unite’s full support in fighting for a fair pay rise.”

It is abundantly clear that the company can afford to invest in its staff and make a substantially improved offer.

Ryanair has just announced that it will be adding further 500 flights at Stansted this October as passenger numbers pick up, says Unite’s regional coordinating officer Mark Robinson.

“It is abundantly clear that the company can afford to invest in its staff and make a substantially improved offer.”

What does Stansted Airport have to say about the potential strikes?

A spokesperson for Stansted Airport told Euronews Travel that they were “surprised and disappointed to learn Unite had chosen to ballot colleagues for strike action on the grounds they consider our latest pay offer to be unacceptable.”

“This is the very same pay offer we agreed with Unite, and which it strongly recommended its members voted in favour of as recently as 20 July.”

Stansted also shared a letter Unite reportedly sent to its members in July where the union stated that they “believe [they] reached the best possible outcome through negotiation”.

“We remain fully committed to working with our unions to reach an agreement that recognises the hard work and dedication of our colleagues and maintains the financial stability of the airport after the extreme challenges we faced because of the pandemic and at a time when passenger levels are still measurably lower than they were in 2019,” the spokesperson added.

They said that Stansted will continue to speak to all staff at the airport - not just those represented by Unite, to talk through a fair and competitive offer.