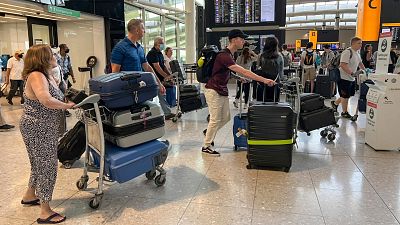 Amid strikes, flight delays and mass cancellations, one in three Brits say they have experienced disruption to their travel plans this summer.

The Office of National Statistics (ONS) polled 2,000 adults in the UK and found that 34 per cent who had travelled abroad in the previous eight weeks had experienced some kind of disruption.

It’s no surprise that nine out of 10 of these people travelled by air.

Half of those surveyed also reported that queues at the airport had been longer than usual and almost a quarter had to wait longer for their luggage.

Is the chaos at Europe’s airports improving?

On the upside, the also data shows that there has been some improvement in the travel chaos compared to earlier in the season.

A July survey saw nine of 10 people report disruption to their travel abroad with 30 per cent saying they waited longer than usual for their luggage.

Though the rate of flight cancellation was lower at 19 per cent compared to August’s 25 per cent, the most recent poll covered half the time.

Despite fewer people reporting disruption to their travel abroad as summer goes on, the rates of cancellations, delays and long waits at the airport are still unprecedentedly high.

How are airport passenger caps helping?

Europe’s airport chaos began when the aviation industry was put under stress by the sheer number of passengers returning to travel once COVID-19 restrictions were lifted.

Strikes over working conditions have made the situation even more complicated. Just today, Scandinavian Airlines cancelled 1,700 flights during September and October as it struggles to recover from industrial action in July.

But Heathrow Airport recently said that it believes that some of this airport chaos is now lifting in the UK due to the daily cap of 100,000 passengers introduced last month.

Airlines were asked by airports to stop selling more tickets for flights this summer and the temporary cap was introduced, lasting until 29 October.

Several other airports including Gatwick, Frankfurt and Schiphol have also introduced limits on the number of passengers travelling each day.

Our primary concern is ensuring we give our passengers a reliable service when they travel.

“Our primary concern is ensuring we give our passengers a reliable service when they travel,” said Heathrow’s chief commercial officer Ross Baker.

“That’s why we introduced temporary capacity limits in July which have already improved journeys during the summer getaway.”

Baker added that the airport wanted to remove the cap as soon as possible but can only do so when they are confident that all workers have the resources they need to deliver a proper service to passengers.