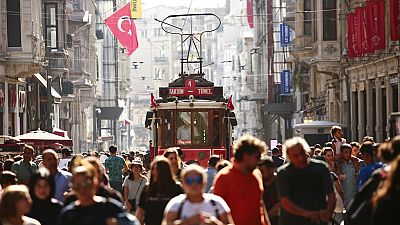 The number of tourists arriving in Istanbul has more than doubled from a year ago, recovering from a COVID-driven slump.

Foreign arrivals to Turkey's largest city - and the third largest in the Middle East - have surpassed pre-pandemic levels, in a much-needed rebound for the Turkish economy.

Arrivals to Istanbul double compared to 2021

Istanbul, which has long drawn international crowds for its culture, art and history, saw foreign arrivals soar in the lead up to the pandemic, with foreigners increasingly coming for shopping, sighseeing and health tourism.

There was a sharp drop off in 2020 but visitor numbers are now higher than they were pre-pandemic, in 2019.

Driven by tourists from Europe and the US, the number of foreign visitors in Istanbul surged nearly 115% in June to 1.47 million, according to data from Istanbul's culture and tourism directorate .

This figure was more than double the approximately 680,000 arrivals in June last year.

Hair transplants are a major driver of tourist visits to Istanbul, with more than 250,000 people a year travelling to the economic capital for a makeover.

Turkey is set to be the fourth most popular European destination this summer, according to a World Travel & Tourism Council report.

The country's tourism revenues nearly tripled in the second quarter of 2022, with foreign visitor numbers surging close to 2019 levels, found the report. Revenues surged to $8.7 billion (€8.5 billion) between April and June - up 190% compared to the same period last year.

Officials had wanted tourism this year to match or surpass 2019's numbers, when some 52 million visitors brought in $34 billion (€33.3 billion) in revenue.

In 2021, tourism revenues doubled to almost $25 billion (€24.5 billion), recovering from the worst of the COVID impact, but remaining far below the levels experienced in 2019.