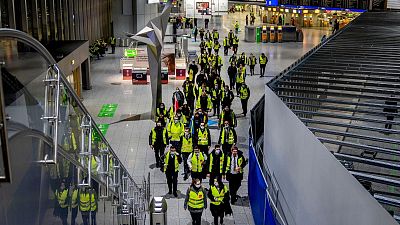 Security employees who control the flow of passengers and luggage walk through a terminal at the airport during a one day strike in Frankfurt, Germany.   -   Copyright  AP
By Euronews Travel  with AP & Reuters  •  Updated: 15/03/2022

Airlines cancelled hundreds of flights to and from German airports on Monday as security workers across the country went on strike amid a wage dispute.

Security workers are staging a full-day walkout at airports including Duesseldorf, Cologne/Bonn and Berlin on Monday, and further strikes have been called for Tuesday, among others in Frankfurt and Hamburg.

Numerous flights were cancelled at Frankfurt Airport due to the strike organized by trade union ver.di, German news agency DPA reported. Starting at 2am, employees of the cargo and passenger controls at Germany’s largest airport stopped working, a ver.di spokesperson said in the morning.

Only passengers with layovers were able to go through security checks in Frankfurt. Airport operator Fraport had called on all travelers hoping to board in Frankfurt not to travel to the airport.

According to Fraport, 130 of 818 flights planned for Tuesday were cancelled. Originally, about 71,000 passengers had been expected at the airport that day.

Employees at Hamburg, Stuttgart and Karlsruhe/Baden-Baden airports also walked out of their jobs. In Munich, Germany’s second-largest airport, a walkout has been underway since Monday afternoon.

Where has been affected by airline strikes?

Other airports including Berlin, Duesseldorf and Hannover cancelled dozens of flights on Monday due to one-day strikes there.

The walkouts are part of a wage dispute between ver.di and the Federal Association of Aviation Security Companies.

The union is negotiating with the employers’ association for a new agreement for about 25,000 security staff nationwide. Ver.di is demanding an increase in hourly wages of at least one euro, among other things.

Around 770 departures and arrivals were initially scheduled for Tuesday, serving close to 80,000 passengers, according to Fraport.

Labour union Verdi demands that employers raise the wages of airport security staff by at least 1 euro an hour for the next 12 months and that staff in different parts of Germany earn the same.

BDLS, the association of aviation safety companies, said all of Verdi's demands amounted to increases of up to 40 per cent and were "utopian".

Three rounds of negotiations have so far failed to produce a result. The sides plan to meet in Berlin later this week for further negotiations.