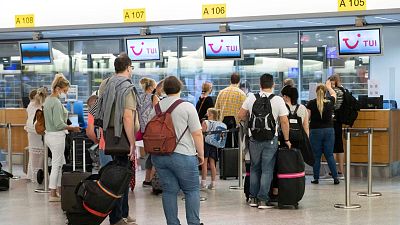 Passengers hand in their luggage at TUI check-in counters at the airport in Hanover, Germany.   -   Copyright  Peter Steffen/dpa via AP
By Rosie Frost  •  Updated: 25/07/2022

Travel company TUI has issued a warning for UK passengers travelling this week as strikes could cause them to miss their flight.

On top of ongoing airport chaos, hours-long queues at ports and thousands of flight and rail cancellations, people looking to get to the airport on Wednesday or Thursday could run into problems if they plan to travel by train.

“We’d like to remind customers of a planned national train strike on Wednesday 27 July which is likely to affect services into airports across the country throughout the day and into Thursday 28,” TUI told passengers.

If you are heading on holiday on either of these days please plan ahead and make alternative plans to get to your departure airport if necessary.

“If you are heading on holiday on either of these days please plan ahead and make alternative plans to get to your departure airport if necessary.”

The company added that anyone travelling on either of these days should allow extra time for their journey to the airport.

When are UK rail staff going on strike?

On 27 July around 40,000 members of the Rail, Maritime and Transport (RMT) union plan to strike for 24 hours. That includes staff at Network Rail and 14 operators like London Overground and GTR - which runs the Gatwick Express.

“Strike action will take place next Wednesday (27 July) as planned and our members are more determined than ever to secure a decent pay rise, job security and good working conditions,” RMT general secretary Mick Lynch said when confirming the industrial action last week.

Train companies expect a severely reduced service to run on the day of the strike and services to start running later than usual on 28 July.

It is also expected to disrupt the Women’s Euro 2022 semi-final taking place in Milton Keynes and comes just a day before the Commonwealth Games begin in Birmingham. People have been warned to only travel by train if necessary.