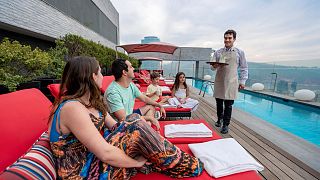 “It’s been a traumatic couple of years.” That’s how the CEO of a hotel loyalty programme sums up the COVID era. “But things are looking great now,” another Chief Executive Officer chimes in.

Or are they? Just as hotel occupancy started to recover at the start of this year, another crisis hit: Russia’s invasion of Ukraine. Flight restrictions, inflation, rising interest rates, rising food prices and supply chain issues all followed. Add to this airline and airport strikes - both gateways to holidays - and you probably wouldn’t want to be a hotel CEO right now.

There’s really only one item on this long list of challenges that hotel leaders have complete control over: how they treat their staff. They can put up their rates to weather all the financial instability and most seem to be coping with supply chain issues. But the responsibility for making hotel jobs fulfilling and fairly paid lands squarely at their feet.

Hotel CEOs give us the view from the top

It can be tricky to get a full and frank picture of how an industry is faring. But a gathering of fifteen CEOs of some of the world’s biggest hotel groups is as close as I’m likely to get to the truth.

Their companies are all members of the Global Hotel Alliance (GHA), essentially the SkyTeam or Star Alliance of the hotel industry. 21 million members earn ‘Discovery Dollars’ by staying at the 800 GHA hotels spread across 100 countries. So insights from their CEOs should be a reliable window into how hotels are doing.

How bad is the hotel staffing crisis?

I’ve heard about a large hotel in London that currently has one floor completely closed off because they haven’t got enough staff to clean and service the rooms.

One travel company in the UK, Classic Collection Holidays, is going as far as refurbishing its head office and offering staff after-work perks like paddleboarding, all in a bid to be attractive to job hunters.

As one general manager mused, “Where have all the staff gone?”

During the worst years of the pandemic, many governments subsidised hotel companies so they could continue paying staff while they were forced shut. Chris Hartley, CEO of GHA, believes this gave workers the chance to “rethink whether hospitality was a good industry. They could rethink work/life balances and consider ‘do I want to be commuting into a hotel and doing split shifts?’”

Once government subsidies stopped, many staff resigned and who could blame them? They said goodbye to long, unsociable hours and instead took jobs that would afford them the privilege they saw many other industries being granted: working from home. For most hotel positions, this just isn’t possible, and never will be. The cook needs to be in the kitchen and the cleaner needs to be in the rooms.

Hotels no longer seemed like a job for life

Another question Hartley suspects hotel staff asked was ‘Is this a secure industry to build my career in?’ When hundreds of thousands of hotels closed overnight in early 2020, it turned the lives of their staff upside down. This made many feel a job at a hotel is a risky career path. If they considered it a career path in the first place.

What I loved about countries like Spain or Italy or France was that hospitality was very much a career choice.

Referring to pre-pandemic times Hartley says, “What I loved about countries like Spain or Italy or France was that hospitality was very much a career choice. Whereas it wasn’t in a lot of other countries. In the UK and the US, hospitality was something you just did when you [were] at university, because you needed a job.”

If hotels want to retain staff long term, they need to make the work seem like a viable and attractive career choice.

James McGinn has had a quarter century career in hotels and “has no desire to leave” yet.

He’s the managing director of Hastings Hotels, having started at the Northern Irish hotel group as quality development manager 25 years ago.

How do hotels make “lifers” of their staff as McGinn calls himself? “We know that we are nothing without our colleagues,” he begins. “We must create the correct environment to allow us to be fully engaged each day. Give [staff] the tools to do their jobs, uniforms that they are proud to wear, train them as required, respect and care for them and their wellbeing, make them feel valued, share information with them, have them fully engaged - in their jobs, their department and the hotel.”

It’s a long list but made easier by Hastings being a family-owned business with no shareholders. “The owners work with us, and they are in and out of the properties all the time”, says McGinn. Decisions can be made quickly and easily, cutting through the red tape that can frustrate staff in any business.

Hotel staff have gone home and not come back

As well as the staff who quit their jobs when they were asked to return to work, many returned to their countries of origin during the pandemic.

Simon Naudi is the CEO of Corinthia Hotels, a Maltese company. “It's very difficult to find people to come back to the industry,” he says, “because it's an industry where, in certain cases, there's a reliance on migrant labour.

“We have Spanish people and Sicilian people in Malta because there's more opportunity. They went home because of COVID, will they come back?”

The UK may be only one of the countries hit by staffing shortages, but it’s certainly the only one to have left the EU.

Everyone I spoke to agreed that Brexit was a large part of the problem in the UK. As one CEO said, “That's what I hate about Brexit, as it was all about the perception that jobs were being taken by Bulgarians, which was kind of ridiculous, because they're the very people that were sustaining our economy and the hospitality industry.”

The UN’s World Tourism Organization (UNWTO) supports countries with their tourism, as it’s a big economic driver. They are currently encouraging governments to invest in their tourism industries by giving young people opportunities to be trained up.

Holger Schoth, 58, has worked at Kempinski, one of the world’s oldest luxury hotel brands, since he was 25-years-old. He says the hotel has always supported him with training and development, giving him no reason to go elsewhere.

Having worked at Kempinski hotels all over Asia, the Middle East and Europe, his career has also given him ample opportunities to travel. “Thanks to Kempinski,” he says, “I was able to not only see the world, but really get to know it. Few people enjoy that privilege, and I've always been aware of that.”

Dillip Rajakarier is CEO of Minor Hotel Group which has 530 hotels in 56 countries, but with a large footprint in Asia and the Middle East. Rajakarier was the only CEO I spoke to who is based in a developing country (Thailand) and this seemed to give him a clear view of what’s needed to make hotels an exciting career choice for a young workforce.

Minor recently opened the ‘Asian Institute of Hospitality Management’ with campuses in Bangkok and Chonburi in Thailand. Would-be hotel staff can learn from Les Roches, one of the world’s top three hospitality schools. Rajakarier says they launched this because, “Thailand is such a big hospitality hub. There was a lot of talent which was lacking training, development, and the opportunity to get degree-level certificates. They can't afford to go to Switzerland. Now in Thailand they can do it for almost a third of the price.” Just as governments need to invest in training, so too do companies if they want to have high quality talent to serve their guests.

The customers you serve have travelled to reach your workplace, why shouldn’t you get to do the same?

Rajakarier also recognises that staff, especially young people, want to travel - and what better way than to be paid to do it. Smart hotels give staff the opportunity to work at properties in different countries, making a career in hospitality seem glamorous and sophisticated, a way to expand your horizons, live amongst different cultures and learn new languages. The customers you serve have travelled to reach your workplace, why shouldn’t you get to do the same?

Loyalty schemes for all

A key part of Global Hotel Alliance is their Discovery loyalty programme. This is wonderful news for customers, who get discount rates and other benefits every time they stay at a GHA hotel. But what about incentivising staff to be loyal to your company? Like in many industries, if hotels don’t show their workers that they are valued and reward them for staying put, high turnover is almost inevitable.

Minor is tackling this head on, offering bonuses to staff who are still there after a year, and with bonuses continuing to be paid year after year.

Corinthia also seems to be taking the problem seriously, recently appointing a senior director to focus solely on the staffing issue. CEO Simon Naudi said to this director, “I’m giving you two months to come back to me with answers and solutions.”

Strikes by airline and airport staff are in full swing across Europe. Hotel workforces might not be far behind if they don’t see increases in their pay packets.