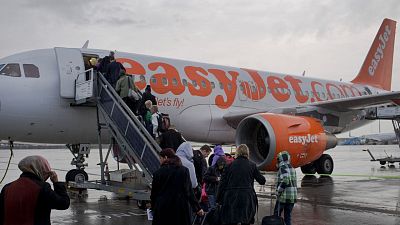 EasyJet has come under fire for making hundreds of on-the-day cancellations in recent weeks   -   Copyright  AP
By Callum Tennant  •  Updated: 16/06/2022

The UK’s second-largest union has slammed easyJet flight cancellations in a scathing email obtained by Euronews.

In a letter to easyJet’s leadership team, Unite - which represents 60,000 aviation workers - demanded to know why the carrier was being forced to cancel dozens of flights per day and hadn’t proactively reduced its schedule in advance.

“This level of disruption and deterioration of the operation cannot continue," the email reads.

"It is a serious safety risk to crew members and is having a disastrous effect on the easyJet brand.

“We feel there is a lack of leadership from within the business. We would expect you, our Chief Operating Officer, to be taking control of this situation."

The news comes after another suite of cancellations, with easyJet on Monday axing 64 flights to or from UK airports, a mass disruption impacting around 10,000 passengers.

Why is easyJet cancelling so many flights?

In recent weeks, many airlines have seen their schedules disrupted by staff shortages and airport chaos.

Most carriers reduced their workforces in response to the COVID-19 pandemic. In May 2020, easyJet revealed it would cut its workforce by 30 per cent, compared with Ryanair’s 15 per cent and Wizz Air’s planned staff reduction of 19 per cent.

EasyJet say that in the end they cut 13 per cent of staff.

Faced with a surge in travel, the airline is struggling. In an attempt to reduce staff shortages, easyJet has announced it will offer existing staff a £1,000 (€1,160) bonus at the end of the summer holiday season.

But until recently, the carrier hadn’t pre-emptively cancelled large numbers of flights. Instead, it has been forced to make dozens of on-the-day cancellations.

By contrast, British Airways announced in March that it would be cancelling up to 10 per cent of its flight schedule between March and October.

Though the news upended thousands of holiday plans, it has helped the airline to limit the extent and effect of any on-the-day cancellations.

EasyJet’s approach was criticised by Unite, who said: "We are concerned how much the company are currently spending on issuing EU261 claims due to the large number of cancellations."

If proactive steps were taken sooner, then the constant negative media coverage would cease to have effect.

“If proactive steps were taken sooner, then the constant negative media coverage would cease to have effect.”

Some staff are, reportedly, unwillingly working into discretion or days off, Unite claims, because "they’re aware that there’s a high chance that the flight will be cancelled if they don’t due to below-par standby coverage."

In response, easyJet pledged that safety was the airline’s number one priority, a message that is “repeated frequently at all levels of management.”

EasyJet crew know it is up to them to decide if they are fit or unfit to operate, the airline claimed.

Will easyJet change its strategy to end the travel chaos?

In a sign that easyJet may be reviewing its strategy for summer 2022, the airline announced on Sunday that it would be cancelling 40 flights a day for the rest of June.

The move is designed to reduce last-minute cancellations and brings easyJet’s approach for June in line with that of other airlines.

“Making these cancellations is not something we take lightly but what’s worse is to cancel our customers’ plans on the day that they are ready to fly," Bellew said.

Multiple unions had urged easyJet to get a grip on its cancellations, warning that airline staff feel the heat of customers’ anger at last minute cancellations.

Easyjet insisted it had a “continuous and open dialogue” with its unions and crew, and confirmed it would be responding to Unite’s letter directly.

The airline added: “There are industry-wide operational issues that are impacting airlines at the moment, which means we have made a number of pre-emptive cancellations.

“Delivering a safe and reliable operation for our customers and crew is our airline’s highest priority.”

In the email, Unite asked that senior management communicate better with staff.

“[We call for] dedicated communication [from management to crew] that we now feel should be sent daily, including on weekends," they write.

This would provide the “ideal opportunity” for Bellew to restore customer confidence in easyJet as well as “gain some much-needed ground to secure the trust” of staff.

The union also asked for a “more informative, accurate and friendly” announcement style for service updates, in the hope that such a style would prevent customers from becoming angry at crew.

Travellers affected by flight cancellations in the UK or EU are protected by law. The UK Civil Aviation Authority has more information on its website and is urging consumers to read up on their rights.