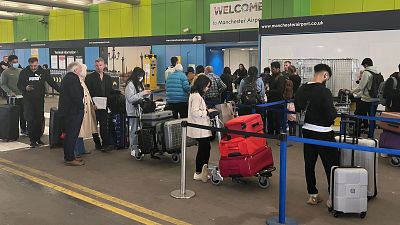 If you’ve got a holiday planned this summer, it’s likely you’re feeling a little nervous.

Winding queues, packed departure halls, and travellers missing flights have become an all too common sight in Europe’s airports. Thousands of people have missed their flight this week alone, unable to get through airports quickly enough due to a lack of staff..

But who’s really to blame for this chaos - the airport, or the airline? Can you avoid it?

As the continent prepares for a bumper summer holiday, here are the airports - and airlines - to avoid.

Are airports or airlines to blame for the nightmare queues?

The entire industry is facing severe staff shortages, after letting go of so many staff throughout the pandemic, but certain airports and airlines are particularly struggling.

At the peak of the COVID-19 pandemic, airports and airlines made roughly 191,000 European aviation workers redundant.

Now, as travel resurges for the first time since 2019, there are not enough staff to man baggage checkpoints, security, and flight crews.

Air Council International - Europe's trade body for airports - have predicted that delays are inevitable at two-thirds of European airports this summer.

If you’re flying out of one of the following places, the airport - not the airline - is probably responsible for any travel chaos.

On Friday, national Dutch carrier KLM openly slated Schiphol after lengthy delays forced them to suspend ticket sales from Amsterdam over the weekend.

“KLM is putting a brake on ticket sales for flights leaving up until and including Sunday because Schiphol can’t get its security problems fixed,” a spokesperson said.

Last month, Schiphol requested that KLM cancel or redirect hundreds of flights to ease pressure on the airport.

The staff shortage is exacerbated by what workers say are inadequate salaries. Workers at Schiphol are threatening to strike, warning it will be a “hot summer” unless job permanency and pay rates improve.

Dublin airport ‘running to the max’

Like Schiphol, Dublin is suffering from a worker shortage. About 1,000 airport workers have accepted voluntary redundancy since September 2020.

On Monday, the airport's chief executive Dalton Philips told Irish broadcaster RTÉ the airport was operating on "very fine margins" and was "running to the max.”

On Sunday, more than 1,000 people missed flights while waiting in long lines.The same day, Ireland’s Minister for Transport Eamon Ryan expressed “deep unhappiness” with the airport’s executive team. A DAA spokesperson conceded that the company has “let the country down.”

Like its Dutch counterpart, the airport is under pressure from workers to improve conditions. Many workers are hired on minimum wage contracts that require them to be available at all times, but only give them 20 hours of work per week.

Visitors to Manchester airport have waited for up to seven hours in winding queues. The airport has struggled to recruit after making most of its staff redundant last year.

In April, Manchester Airport bosses issued an apology to passengers admitting they had "fallen short of the standards they expected".

In the same month, managing director Karen Smart stepped down after copping strong criticism from passengers and workers.

Thousands of holidaymakers have experienced nightmare delays at Mallorca’s Palma airport this year.

Post-Brexit rules - requiring non EU residents to have their passports stamped on arrival and departure - have added to the chaos caused by a surge in travel.

The island’s police union have warned that the airport will “collapse” without the urgent recruitment of more staff.

It’s not always the fault of the airport, however. Many airlines are also struggling to meet demand, and have been forced to cancel flights at the last minute.

Airport delays can also be caused by a shortage of airline-employed staff at check-in desks, so it is not always clearcut who is responsible.

Under short-staffing pressure, British Airways has reduced its schedule by 10 per cent - around 8,000 round trips - between March and October.

The airline plans on hiring 6,000 new staff this year. But BA staff at Heathrow are threatening strike action, urging the carrier to reverse a 10 per cent pay cut made during the pandemic.

The strike ballot will close at the end of June, and any industrial action would take place in July, coinciding with the start of the busy summer holiday season.

EasyJet passengers have been hit with flight cancellations and long delays in recent weeks. Last Thursday, the airline cancelled some 200 flights after suffering from a software glitch.

The carrier also cancelled 240 flights between May 27 and June 10, ruining the plans of tens of thousands of half-term holidaymakers flying from London Gatwick.

The decision was prompted by a combination of issues affecting operations, a spokeswoman said.

“We are very sorry for the late notice of some of these cancellations and inconvenience caused for customers booked on these flights however we believe this is necessary to provide reliable services over this busy period.

Tui is the latest company to resort to mass cancellations. On Tuesday, the carrier announced that nearly 400 flights would be axed before the end of June - roughly six flights a day.

34,000 travellers will be impacted - as their entire holiday will be cancelled

"Recently, due to a combination of factors causing significant operations disruptions, we made the difficult decision to cancel some of our flights,” a TUI statement read.

"If you are affected by a flight cancellation and were travelling on a TUI package holiday, this means your whole holiday is impacted and thus cancelled.”

What does this mean for compensation claims?

Your right to compensation depends on whether the airport or the airline is responsible for you missing your flight.

If the airport is responsible - for instance, you miss your flight while waiting in the security queue - a refund is unlikely.

No major European airport has a policy of refunding passengers who have missed flights due to long queues.

“In law, passengers could possibly claim frustrated contract and argue the airport is at fault for them missing their flight - but this would almost certainly require going to court,” explains Rory Boland, editor of Which? Travel.

If your flight is delayed or cancelled by the airline, you are entitled to compensation. A passenger on a cancelled flight is entitled to a seat on the next available flight to your destination - even if it is with a rival carrier.

You are also entitled to accommodation, food and drink if you are stranded for an extended period of time. Airlines may require you to book your own accommodation and keep the receipts.

If your flight is delayed, you may also be entitled to compensation. If you booked a flight that either departed from the UK or Europe or was with a UK or European airline, you're protected by the Denied Boarding Regulation - or EU Regulation 261/2004 - if your flight is delayed. For delays longer than three hours on short-haul flights, you are entitled to up to €250.

You can read about these regulations here for EU flights and here for UK flights.